Allison Tait: Middle-grade author, writing teacher extraordinaire and beloved podcast host tells us how she gets it all done Allison Tait had it all figured out. Having worked for years as a staff writer and sub-editor at glossy women’s magazines like Cosmopolitan and Cleo, she went freelance in her late 20s and could see the obvious genre for her first novel would be romance. It made perfect sense: she knew the audience, she knew what they wanted and she had the voice down-pat.

However, it’s not romance or contemporary women’s fiction where Allison has made her mark as an author. Instead, she’s found her creativity and storytelling work best when writing for children: she’s the author of The Mapmaker Chronicles and Ateban Cipher adventure series, along with her newest book The Fire Star (A Maven & Reeve Mystery).

From debt advice to adventures and battles

While the commercial women’s novel she wrote was going through the publishing process, Allison’s agent asked her whether she had any ideas for children. As luck would have it, an idea had sprung to mind during a chance conversation with her son, Joe, who was a voracious reader of middle-grade fiction.

“I said, ‘Six months ago, I had this random idea about mapmakers’. And she said, ‘Great, send me a synopsis’. I wrote the first draft of the first Mapmaker book, Race to the End of the World, in six weeks. It was a really fast story, because it was really exciting for me.

“It was the most fun I'd ever had writing anything. It was completely outside of what I thought I should be writing, so I just really let myself go with the storytelling. Plus, because I had read so many of them, I was in the zone of what my boys really liked about books; it's non-stop action, it's all these random things happening all the time.

“I wrote that first draft and I read it out loud to Joe while it was with my agent, and he told me what the boring bits were so I could get rid of those and he was so funny, he said ‘Mum, if it's dragging, just chuck in a battle, that's going to work’.” And work it did. Allison ended up writing four books in the Mapmaker Chronicles: Race to the End of the World, Prisoner of the Black Hawk, Breath of the Dragon and Beyond The Edge Of The Map.

Race to the End of the World was shortlisted for a number of children’s book awards, including the Readings Children’s Book Prize 2015, the 2016 YABBA Awards, and the 2016 KOALA Awards.

Despite her background leading her in one direction, Allison has continued writing middle-grade fiction, and says she’s found her niche.

“What I found writing middle grade did for me was unlock the storytelling aspect of it and really allowed me to really lose myself in the story rather than thinking about the scenes, and what I wanted to say,” she says. “When I was writing contemporary women's fiction, I had these things in my head that I wanted to explore, as opposed to actually just wanting to tell a story. “I was able to stop feeling self conscious about what I was putting on the page and who might be reading it, and just really go for it. What I then discovered is that I had a whole lot of things that I didn't even realise I was saying until after the book finished.

“It wasn't like I set out to write a book that was a coming of age, but that’s what emerged through the story that I told, and it's just a more honest and natural way to write a story for me. I found I had to take a step back and write for someone else.”

Mystery and adventure in The Fire Star

Penguin Books is the publisher for Allison’s book The Fire Star (A Maven & Reeve Mystery) [September 2020]. Zoe Walton, her publisher at Penguin Random House, says she was thrilled to work with Allison on the book.

“Funnily enough, I feel like I’ve known Allison forever because of her blog and her social media that I’ve followed for many years, but we only met in person for the first time last year to talk about The Fire Star,” Zoe says. “I knew as soon as we started talking and as soon as I read this brilliant story that we would be on the same wavelength.” 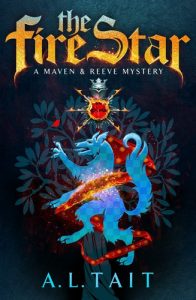 Part of that is Allison’s focus on creating characters which are positive role models, Zoe says.

“Allison has the knack of writing beautifully nuanced characters who defy stereotypes, and layered stories full of intrigue, while at the same time keeping us entertained with a page- turning, high-stakes adventure.”

The Fire Star is a detective novel in a medieval-style setting, with two protagonists – Reeve, a would-be knight and Maven, who wants to escape the limitations of the society she lives in.

“The two of them become almost immediately embroiled in this mystery when a fabulous jewel called the Fire Star goes missing,” Allison says. “They have to work together, they have three days to find the jewel or they're going to lose everything. It's high stakes, a lot of it is action and adventure, but at the heart of it is mystery.”

An inspiration to other writers

Popular middle-grade author Tim Harris says Allison’s industry and writing knowledge and her experience as a writer has been motivational for him.

“She was clearly on the front foot with her content output, so she was someone there to look up to and be inspired by what she was doing – to think, you know what, I'm gonna sit down and type my little butt off for a while and try and get some words done as well.”

“One of the things that I really liked that she does use her #writeabookwithal hashtag, she challenges her Twitter followers, Facebook followers, and Instagram followers to get their words done. I think that's so cool that she's not only doing it herself, but she's saying, ‘Hey, if I can do it, you can too’. And so she sweeps up aspiring and emerging authors with her.”

Training up the competition

Helping other writers to achieve their dreams is clearly a major driver for Allison, who teaches a number of Australian Writers’ Centre courses and co-hosts the So you want to be a writer podcast.

“The thing that is really rewarding about teaching is just watching people who maybe haven't written for a very long time, come to the realisation that I came to as well of ‘I'm going to have a go at this',” Allison says. “A lot of people dream about being writers and will never do anything about it. I think it's a real privilege to be able to be in the beginning stages of that journey with them.”

Allison has also taught freelance writing and literally wrote the book on teaching creative writing to children, for the Creative Writing Quest for Kids course.

“I find it really rewarding because I can see where the kids have paid real attention to the different modules in the course, I can see it in the stories that they put up.

“The other thing that blows me away about it is just how good they are, they're amazing – the quality of the story that some of these kids are presenting, you know, when they're 12 is just mind blowing. They’re going to be a bit of competition in a few years’ time!”

Organised chaos – minus the chaos
In her spare time (and you’d be forgiven for asking what spare time, given the amount Allison gets done), she says walking her dog – well-known to podcast listeners as Procrastipup – helps both her creative process and her mental health.

“I have a big country garden, I walk the dog, I give my oldest son driving lessons, I go to the beach,” she says. “It's not what you call a high octane lifestyle, but it suits me.

“People think that creativity goes with chaos. And it's absolutely not the case. For me, it's all about making the time in your day to do the writing. And the only way that you can do that is to have a routine.”

PrevPreviousBestselling children’s author Tim Harris: How he got his big break and why he loves writing for kids
NextCOMP CLOSED ‘The Thursday Murder Club’ by Richard OsmanNext