Caro Was Here. And so was Elizabeth Farrelly. A few weeks back, we spoke with established author Elizabeth Farrelly on the release of her first young fiction book, Caro Was Here. Elizabeth completed a course at Australian Writers’ Centre that provided inspiration for this one, and she chats about that and the book right here… So, tell us about this new book!
Caro Was Here is a pre-teen adventure story, set on Sydney harbour and dealing with freedom, escape and danger. Aimed at the 10+ age group, it has a fast moving plot and a fairly intense entanglement with evil.

The action takes place on Caro’s 12th birthday, a day for which she has yearned. When, by recess, the birthday has gone pear-shaped, Caro wants to break something. Rules. Specifically school rules.

So it's is a story about freedom and naughtiness, about the relationship between the self and social rules, about whether you can be too brave. Also friendship, loyalty, trust, betrayal and how people often turn out to be more interesting than you think.

Wow, a lot going on. So what sub-genre would it fall into, if you had to choose?
Above all, Caro is an adventure. It’s about the wild yearning for adventure, the trouble that this yearning can generate, and the thrill that (sometimes) makes it worth doing anyway. I think of it as ‘crime for children’. Like the adult crime fiction that I adore, it uses setting almost as a protagonist, forcing character growth through an emotional and dramatic engagement with place or landscape.

When did the idea for the book come to you?
The germ of the story came from an online course, Writing Books for Children and Young Adults, taught by the wonderful Judith Ridge. It drew on an adventure I had as a child, which involved skipping school, taking friends to an island and becoming willfully marooned.

One of my editors commented that she didn’t think middle class kids would be quite this naughty. Certainly, I’d be shocked if my kids did anything like this. But I had to admit, some of it at least, I have done myself. And I suppose that was one of the drivers. Children today have fewer physical adventures than we had, as kids. It’s our fault, in part, for over-parenting. And it’s also down to the ubiquity of screen culture.

And that clearly shaped the story you wanted to write…
I wanted to write a physical adventure with a purposeful plot and a girl in the lead; a story where a girl must draw on all her courage and strength and, in the end, intelligence, to survive. Where she is forced to take responsibility for her actions and wilfulness.

I [also] wanted to set the story in contemporary Sydney, which I think is breathtakingly beautiful and surprisingly under-represented in our literature. I chose this ‘ordinary’ here-and-now setting because I wanted to try to capture the magic overlay that child perception brings to even the real, ordinary world.

That’s so true about children finding magic in any place. You mentioned doing our course in Writing Books for Children and Young Adults. What did you find most useful from that?
Judith Ridge was a splendid tutor – at once critical and encouraging. I chose to do the course online – it suited my unpredictable days. I enjoyed the clarity and simplicity of Judith’s approach: choose a character, construct a three-part schema, go for it. That is probably over-simplifying, but it meant I could hold it easily in my head and approach Caro Was Here as a sort of fairytale. I liked that. 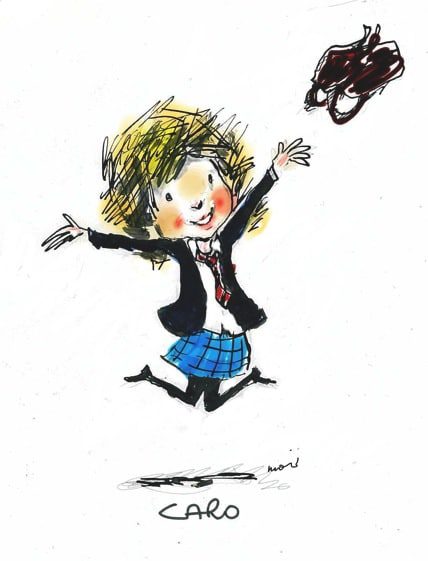 And how long did the book take for you to write, from idea to finished manuscript?
I started Caro when I was stuck on the adult crime novel I was writing (still unfinished!). I thought writing for children would be easy and quick – a couple of months and I’d have it done. Since my fiction writing is squeezed, if I’m lucky, into the first 40 minutes of the day, delivery time was important.

Easy and quick huh? How did that work out for you?
In fact, of course, it took more like four or five months to draft, and another few weeks to self-edit. It was around a year before acceptance and another year, more or less, to launch date. So it’s not a short process, but I have to say, it has been SO much fun.

And excitingly, despite your extensive background as an author and journalist, this is your first children’s book. Why did you decide to move into children’s books? (Besides thinking you’d be able to get it done in super quick time!)
I love fiction. I am interested in truth – not factual truth, but I suppose a kind of moral truth that sits at the heart of things. And I think that fiction can approach this kind of truth more closely than non-fiction.

I think this truth lives in character and its engagement with setting. This fascinates me: landscape as a protagonist. Plot, which both structures this engagement and makes it delicious, is an addiction with me. Luckily, as drugs go, plot has fewer side effects than most.

But there’s also this. In the end, you should write what you love to read. My first reading love, as a child, was adventure. Then mythology. Then (as a teen) I loved poetry and drama. Now I read crime. For me ‘real’ writing – non-fiction – is work. Fiction is a pleasure.

You have quite the addiction to fiction. So how did your book deal come about?
I sent the manuscript to an agent, who basically told me to go away.

Oh dear.
So I moped for a bit, and then spoke to a friend who was a former children’s book agent in London. She sweetly said, “no, it’s good. Don’t bother with an agent. Send it straight to Walker Books. Sarah Foster [then CEO of Walker Books Australia] is the best.”

I followed her advice but heard nothing, apart from an acknowledgement, for so long I’d forgotten Caro even existed. One sunny morning I was in a Monaro shearing shed, watching crutching, when I had a text saying that Walker liked the story and wanted to publish! I was beside myself with joy.

Maybe we should start a series on “where you were when you found out you’d been published”! Brilliant. So, a typical writing day – do you have a routine?
I write best in the morning. For me this is especially true with fiction, which draws strongly on my dream world and thrives, I think, on the leftover wisps of the stuff. So I’d write Caro from 6.30 to 7.10am, before getting the children up and off to school. It was hard, but it meant that I could then move into my day job as an opinion columnist with a clean heart and soul. Writing, as we know, is a form of self-medication.

It is indeed. And what’s next for you? What are you working on now?
I torture myself with dreams of being able to write fiction full-time. But next, I hope, is the second in the Caro series, which will probably be Nigel’s story. Nigel is many people’s favourite character. He is so dorky but also weirdly energetic, kind of sweet and impossible to offend. He’s funny and nerdy and complicated, and he has no idea what is in store for him. He’ll be fun to write – and I hope, to read.

Yes, we’ll hold you to that one! And finally, what’s your advice for others who would love write a children’s book?
Do it! Find a character you really like, in the sense of feeling real affection for them. Make the character want something, make their journey difficult, be curious about how they will respond, and above all, write! Every day. Never give up. Silence your inner critic. Never regard a refusal as final. Write what you would have liked, as a child, to read. Or maybe just do Judith Ridge’s course!

Great advice. And you can find Caro Was Here available at all good bookstores, or through this link. You can also take a closer look at our course in Writing Books for Children and Young Adults, where you can learn with Judith online or in person in Sydney or the fabulous Deb Fitzpatrick in Perth!

PrevPreviousTraditionally published, then self-published – this author compares the two
NextLaura Greaves on her new book and being a writer-holic…Next