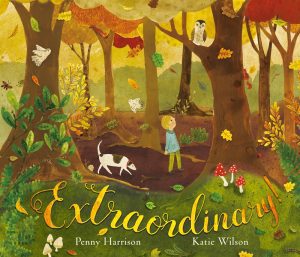 When journalist Penny Harrison made the switch to writing feature stories, little did she know it would lead to the publication of her first picture book.

“I had been working as a local newspaper journalist for 10 years and was just thinking about returning to work after my first baby,” she recounts. “I had always been keen on the idea of freelancing, especially when I started to have children, but didn't feel I had the know-how or confidence.”

From that cautious beginning, Penny has gone on to a successful career as a freelance writer and has also published several picture books. One of her books, Extroardinary, was even read out loud by Sarah, Duchess of York, on her Story Time YouTube channel.

Penny made the smart move of enrolling in the foundation course Freelance Writing Stage 1 at the Australian Writers’ Centre. And even for a trained journalist, she found the course material immediately useful.

“This was such an amazing course. I was taught so much about approaching editors and writing submissions but, really, the most valuable thing I took away was how to craft and write a good feature story.”

Penny wasn’t content with just magazine content though. Her time off to have children had exposed her to a whole new world of picture books – and she was intrigued. Naturally, the course Writing Picture Books was next in her sights.

“I knew nothing about the children's book industry when I enrolled in this course. I actually never thought I was much of a creative writer,” she recalls. However, once again, she was able to take so much out of the course.

“I learned a great deal about the industry and how to put together a submission. But, in the end, it was the focus on structuring a picture book that really resonated with me and it was fascinating to learn about the relationship between words and pictures that make the picture book so unique.”

The most valuable thing she learnt though?

“Kill your darlings. So hard to do, but so helpful!”

By completing these two popular courses when she was somewhat of a crossroads in her life, Penny saw her options open up immediately.

“Before I finished the Magazine and Newspaper Writing course, I had sold my first story to The Sydney Morning Herald. Shortly after that, I became a regular contributor to the Herald Sun Home Magazine, The Weekly Times Farm Magazine and the Yarra Valley & Ranges Country Life Magazine!”

Even with the speed of her progress, it was perhaps no great surprise for her to be earning an income as a feature writer, considering her journalism background. However, it wasn’t until completing the course Writing Picture Books that she believed she had the ability to write creatively and have the confidence to explore her creative side.

“I now enjoy taking time out from my freelance work to concentrate on more creative ideas. It's an exciting, and unexpected, turn in my career.”

Enjoying the fruits of her labour

Penny now works freelance full time for the Herald Sun Home Magazine and has been given several regular features and columns. She also contributes to other magazines and “occasionally” blogs about great gardens!

After finishing the Writing Picture Books course, she started work on several manuscripts and after submitting two of them to EK Books, she secured a publishing contract. She has now published beautiful titles, including Extraordinary, The Art Garden, Me and My Boots, Dance With Me, and Emily Green's Garden.

So, what would she say if someone was considering a new career path involving writing? To head to the Australian Writers’ Centre of course…

“I have already recommended several courses to family and friends. The courses are so practical and well structured, with something valuable to learn in every class. And the tutors are so generous with their advice, time and knowledge.”