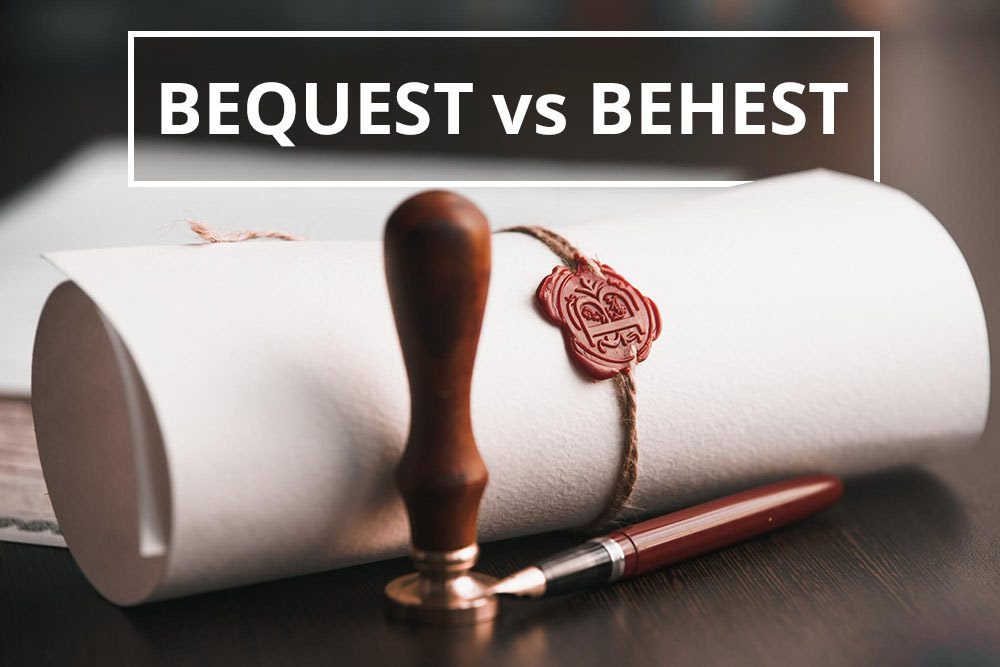 Each week here at the Australian Writers’ Centre, we dissect and discuss, contort and retort, ask and gasp at the English language and all its rules, regulations and ridiculousness. It’s a celebration of language, masquerading as a passive-aggressive whinge about words and weirdness. This week, at our behest, we beseech you to read on as we talk about the meaning of bequest.

Q: Hi AWC, I have a request about the word “bequest”.

Q: Would you believe I am bewildered and bemused by the difference between “bequest” and “behest”?

A: Without wanting to besmirch your good name, we could definitely believe you’re having trouble betwixt these two.

Q: Okay, wait, what? You had to bring those little chocolate bars into this? We were doing so well.

A: No, we— never mind. Anyway, you’d like to know how the words “bequest” and “behest” behave. Why?

A: Fair enough. Let’s start with “bequest” and its close relative “bequeath”…

Q: That’s funny, as I’m sure you often bequeath things to close relatives.

A: Yes, but usually only to the ones who don’t interrupt.

A: Huh? Oh, you’re looking for “touché” – a French word associated with the sport of fencing, but used in English to compliment someone on a clever point made at their expense.

Q: And it has nothing to do with the 1983 song by Kajagoogoo?

A: No, hush hush. Anyway, we’re moving in circles. Back to the topic. A “bequest” is essentially a legacy – usually something you leave in your will.

Q: That reminds me of the time my aunt Kath successfully sued the surgeons who had accidentally left something in her Will. After the surgery, poor Uncle Will would always beep when going through the airport scanners. And at Kmart.

A: Right, okay. Well, “bequest” is a noun – and the verb is to “bequeath” items in a will. So you might have a bequest of $5000 to gift to your local animal shelter. So that bequest is bequeathed to the animal shelter.

A: Of course you can. But lawyers need big words from times gone by to fill up all those dusty volumes on the shelves.

Q: True. So, would you use “bequest” and “bequeath” outside the context of a will preparation or reading?

A: Not really. “Bequeath” can be synonymous with passing down or handing on something, but you’d want to pick the right audience to make it work.

Q: So where does “behest” come in? I heard this on the radio the other day. Is this legal too?

A: Well, yes, kind of. But someone doesn’t need to be dead for this one to pop up. A “behest” is essentially a formal or strong command. Think of it as the more persuasive older sibling to “request”.

Q: Ah okay. Can you show it in a sentence?

A: Sure. Things are usually “at the behest” of someone. So, “The emergency meeting was called at the Prime Minister’s behest” or “At the behest of his friends, he got up on stage and sang”.

Q: So it’s a strong request to do something, from an individual or group?

A: Yes, but remember that “behest” isn’t a verb, unlike “request” which can be both noun or verb. For example: “I would like to request that you listen to my request.”

A: You’ll almost always see it “at the behest of…” or “at someone’s behest” – and usually those people are often politicians or public servants. They love the word “behest”.

Q: Right. So can you sum things up please?

A: Sure. We suggest and attest that a “bequest” is best professed after death – something you leave or bequeath to be received, we believe, by one who grieves. And as you’ll have guessed, “behest” is expressed as more of a pressed request, put to the test by those who won’t rest until it’s been stressed.