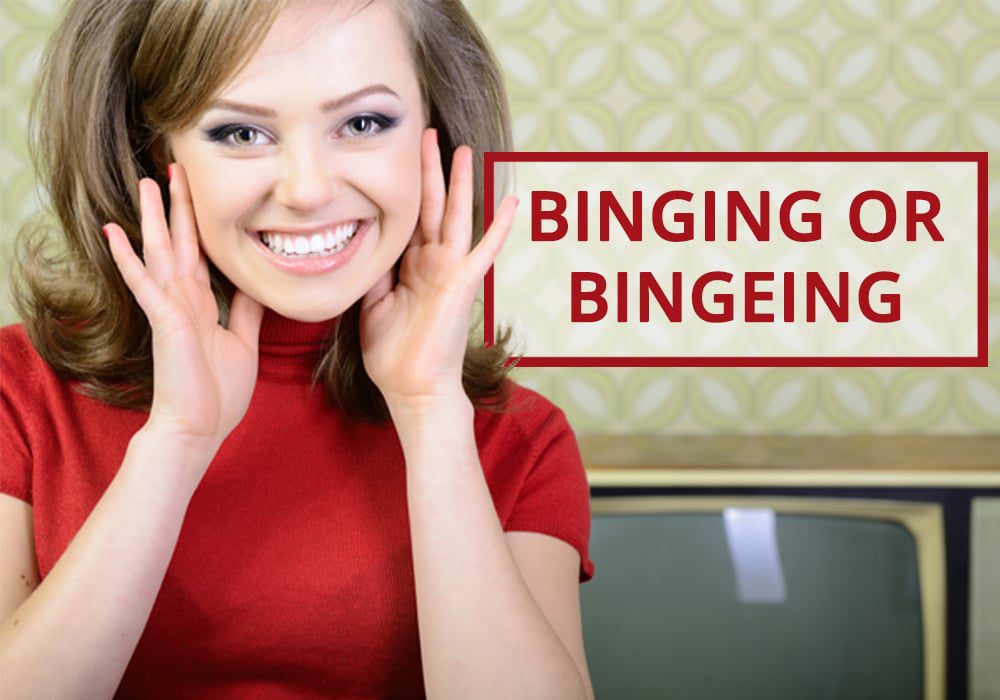 Each week here at the Australian Writers’ Centre, we dissect and discuss, contort and retort, ask and gasp at the English language and all its rules, regulations and ridiculousness. It’s a celebration of language, masquerading as a passive-aggressive whinge about words and weirdness. This week we're bingeing on our binging Q&A…

Q: Hello AWC – I’ve been binge-watching TV lately. Can you tell me if it’s spelt “binging” or “bingeing”?

A: Ah yes, these can be awkward.

A: Probably because your brain wants to drop the “e” but it doesn’t feel right.

Q: My friend Karen once wanted me to drop an “e” at a music festival and it didn’t feel right then either.

Q: I ended up dropping the “a” and spelling it “festivl” instead. That was back when I was working as a signwriter. We only had space for seven letters.

A: Right. Shall we continue?

A: Okay, so English is a bit messy with this rule and exceptions abound. Words such as “challenge”, “change” or even “plunge” seem to have no problem dropping the “e” to “challenging”, “changing” or “plunging” respectively.

A: Even the word “range” moves to “ranging” with ease.

A: But there are a bunch of words, mostly ones that already contain a soft-G sounding “ing” (like in “binge”) that struggle when adding another hard-G “ing” on the end.

A: Words like “binge”, “hinge”, “tinge’, “singe” and “whinge”. Because we tend to drop the “e” on all others, we automatically attempt that here. We end up with “binging”, “hinging”, “tinging”, “singing” and “whinging” which all look like they should rhyme with “ringing”.

Q: Yes. When I see “binging” I think it’s what users of the search engine Bing must do when looking for something. Like Googling your name.

A: It certainly has that effect, because we’re used to seeing “ringing” or “winging” and “stinging” as those hard-G sounds.

Q: And “singe” is a real problem – because “singing” is already taken!

A: Exactly. Even “tinging” is also the sound you make when you propose a toast. “Ting ting ting!”

Q: That happened at my cousin’s wedding last month!

A: Yes, calm down. Toasting at weddings is very common.

Q: No, you misunderstand. My cousin rang the New York Stock Exchange opening bell as part of her wedding. “Ting ting ting!”

A: You have strange cousins.

Q: So back to my original question – how do I spell these words?

A: Well, most of the world’s dictionaries are okay with EITHER option (keeping or dropping the “e”) – although specific cases like “singeing” and “tingeing” are usually preferred by most, due to being less ambiguous.

Q: What does the Macquarie Dictionary say?

A: Here in Australia, we seem to be more decisive, but it’s still a mixed bag. “Binging” and “hinging” are listed, while “bingeing” and “hingeing” are not. Meanwhile, “whingeing” is listed while “whinging” is not.

Q: What about “tinging” or “tingeing”?

A: This is a rare case where Macquarie lists either as acceptable.

A: We’d argue the easiest way to go is by dropping the “e” off everything except “singeing” and “whingeing”. That should cover all “–nge” verbs.

Q: But I prefer to write “bingeing” because it just looks better. And as this diagram shows, it seems to be more popular too.

A: Macquarie may not like it, but the world appears to be on your side. Although that ngram graph ends in 2008 – before the true rise of “binge-watching”. It would be great to see more recent stats on usage.

Q: In the meantime, the rule is just to be consistent?

A: Yep. You’re never going to please everyone all of the time. But if you at least stay consistent, you won’t confuse yourself!

Q: Thanks. Now I’m off to binge-read all the Q&As that we’ve ever done here on this newsletter.

A: Wow, that’s a lot of binging you’ll be doing.