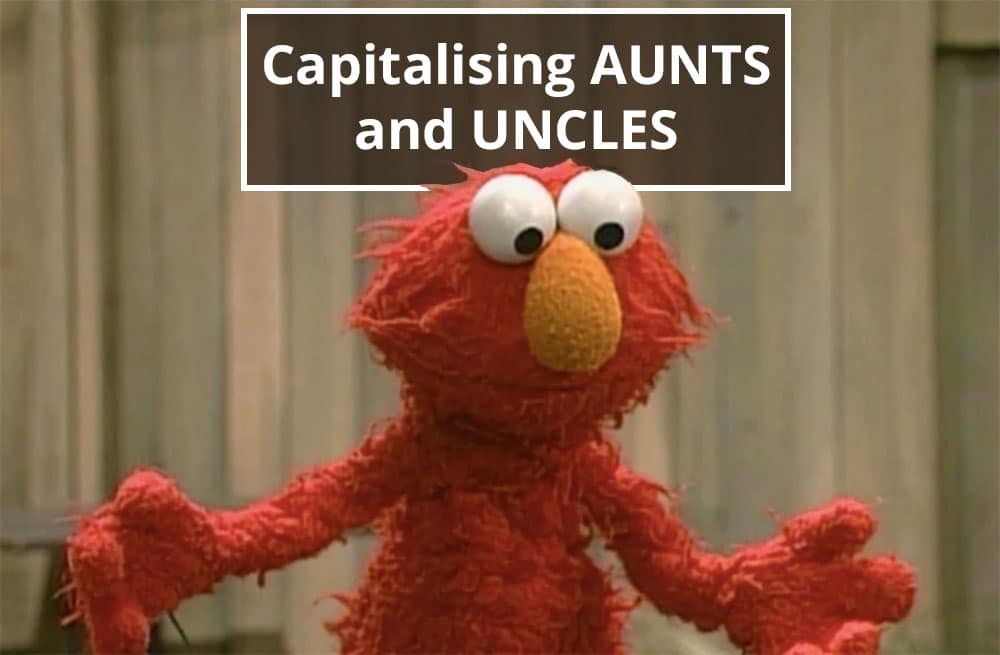 Each week here at the Australian Writers’ Centre, we dissect and discuss, contort and retort, ask and gasp at the English language and all its rules, regulations and ridiculousness. It’s a celebration of language, masquerading as a passive-aggressive whinge about words and weirdness. This week, it's all relative and Bob's your uncle…

Q: Hi there AWC. You know how I’m always talking about my aunts and uncles in this column?

A: You do seem to have a very large family.

Q: Well, a question came up the other day about whether I should be capitalising “Aunt Fi” or just calling her “aunt Fi” with no capital letter? Is there a rule?

A: You’ll be pleased to know that there is a rule that should tick all the boxes.

Q: Do you mean my Uncle Raoul? He tickles the boxes at the Elmo toy factory.

A: No it’s – never mind. So, the rule applies not just to aunts and uncles – but to all of what we call “kinship” names.

Q: Is a “kinship” a kind of house boat you live on with all your cousins and grandparents and extended family?

A: “Kinship” words are things like aunt, uncle, brother, sister, grandma, grandad, mum, dad and so on. And the rule says that you capitalise if one comes immediately before a personal name – OR if it’s used in place of a specific name.

A: “We’re having Christmas at Aunt Mary and Uncle Joseph’s house. I think Grandma and Dad will stop by too.”

A: Yes. So we DO NOT capitalise kinship words if they’re used generally OR if they follow immediately after a personal name (often a surname).

A: “Many of their aunts and uncles were in the crowd when the Campbell sisters swam for gold at the Commonwealth Games.”

Q: What about the Blues Brothers?

A: That was a band name in a movie.

A: Also a band name. Instead, try something like “the Gibb brothers formed The Bee Gees.” In fact, B-Gs stood for “Brothers Gibb”.

Q: How deep is your love for useless trivia? Anyway, I feel like there’s one rule missing.

A: Yes, you’re right. And it’s the reason your earlier example about Uncle Raoul was incorrect.

A: Yes. You should have actually said “my uncle Raoul” – with a lowercase “uncle”.

Q: I already told you. He tickles the Elmo boxes.

A: No, not his position. In grammar, “apposition” is when two words or phrases sit alongside each other and both relate to the same thing. So “my uncle” and “Raoul” are two such things in apposition to each other.

A: No. The same rule of apposition also applies with the possessive pronouns his, her, my, our, your, or their. If they precede, then lowercase it is.

A: Sure. “My uncle Jack and his grandma Jill went up a hill belonging to our grandpa Joe. They were fetching a pail of water to fill up their jacuzzi.”

Q: I did always wonder what the water was for. And did anyone else think Jack and Jill were a couple all this time? Show of hands?

A: Who are you talking to?

A: If it’s part of a name or in place of the name, capitalise it. E.g. “Uncle Jack tumbled down, followed by Grandma.“ But beware of possessive pronouns in front, as they remove the capitalisation. E.g. “My grandma Jill tumbled after our uncle Jack.”

Q: Why was he even wearing a crown? It’s no wonder he broke it.

A: Um, a crown is also the name for the top of your head.

A: Also leave capitals off kinship words when talking generically or following a personal name. E.g. “We think uncles and grandmas shouldn’t climb hills. But the Williams sisters should play tennis.”

Q: Thanks for the explanation!

A: Does your uncle Raoul still work at the Elmo factory?

Q: No. He now sells jacuzzis…