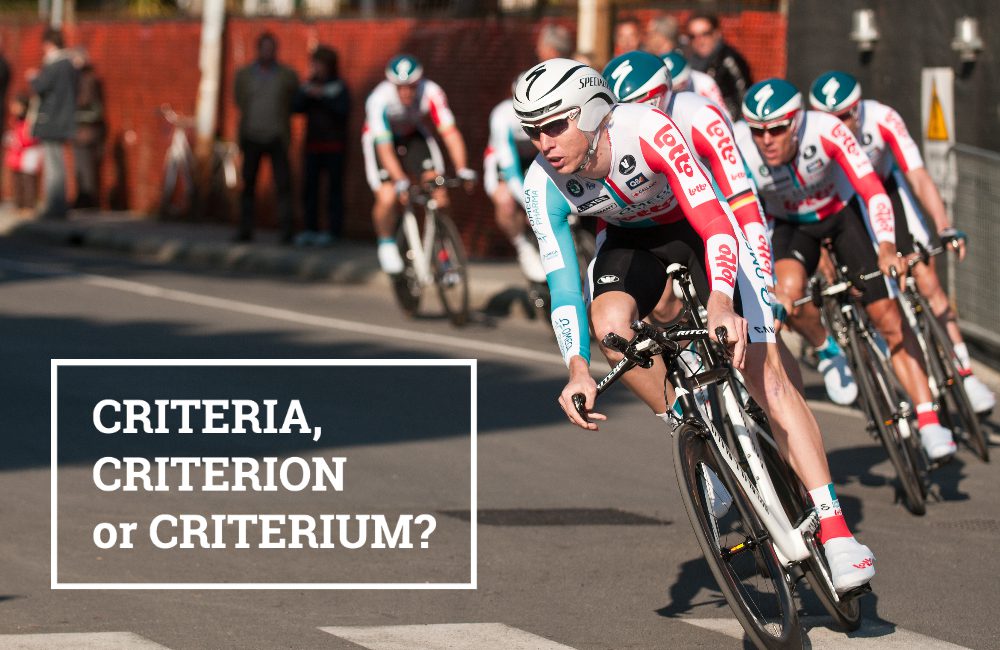 Each week here at the Australian Writers’ Centre, we dissect and discuss, contort and retort, ask and gasp at the English language and all its rules, regulations and ridiculousness. It’s a celebration of language, masquerading as a passive-aggressive whinge about words and weirdness. This week, we have the criteria of influence…

A: We aim to please.

Q: But I did have a question. Would you ever write “each criteria will be judged accordingly” or “the third criteria is tricky” – i.e., is it singular?

A: No, “criteria” should be used as a plural. The singular form is “criterion”, which Macquarie Dictionary defines as “a standard of judgement or criticism; an established rule or principle for testing anything”.

Q: Hmmm, then why do I keep seeing “criteria” used as a singular noun?

A: Yeah, you’re not imagining things – Macquarie Dictionary even acknowledges that there is a trend appearing which sees words like “data”, “media” and “criteria” being treated as singular instead of datum, medium and criterion. Those first two have been more successful in this regard.

Q: Yeah, the only time I’ve seen “datum” used would be, “if you see someone that you like, you datum”.

Q: So can you give me some examples?

A: Sure. “Academic ability is not the only criterion upon which candidates are assessed”. Or “the third criterion requires you to jump through a hoop”, or “the company will change its criteria following the unfortunate hoop accident”.

Q: Ouch. I did wonder about the hoop thing.

Q: Wait – you said “its criteria”. But “its” is the singular possessive!

A: Careful, you’re confusing two things. Companies should always be referred to as singular “its” rather than “their” – e.g. “Qantas laid off much of its staff” or “the company will hold its annual picnic on Zoom”. That’s what the “its” was paired to.

A: In English, it’s been kicking around the dictionaries since the early 1600s – coming from the Greek “kriterion”. It’s related to “critic” – both coming from the same root “krei” meaning to distinguish or discriminate.

Q: Is that also where “critter” comes from?

A: Actually no. “Critter” dates back to 1815, from a humorous pronunciation of “creature”.

Q: Why is the singular for data “datum” and media “medium”, but criteria is “criterion” instead of “criterium”?

A: The other two aren’t Greek in origin – rather Latin, hence the -um ending. And even with the Latin words, it’s never an exact science either in predicting how certain words will behave. For every agendum/agenda or spectrum/spectra, you’ll find an album/albums to counter it.

Q: I do like picturing a rapping gang of hoodla recording multiple alba.

A: Haha, yes, although “hoodlum” isn’t Latin in origin. It came about in 1870s California, possibly named after a specific San Francisco band of thieves known as the Hoodlum Gang.

A: Actually, despite not being the singular for criteria, you may have heard the word “criterium” in relation to bicycle races. Technically, it’s defined as a closed circuit time trial race, where cyclists will complete laps of anything between 400m to 10km in length, often around an urban route, cheered on by screaming fans and probably the odd cow bell.

Q: So what would you call more than one of these races, “criteriums”?

A: Yes you would.

Q: So to recap, although it’s common to see “criteria” used as a singular, it’s not technically correct. “Criterion” is what you’re after.

Q: And just checking… Michael Crichton has nothing to do with this, right?

A: No, this topic is unrelated to the Jurassic Park author. Although it does remind us of a joke. What do you call a fierce, vicious, savage, wild, vehement and ferocious dinosaur?