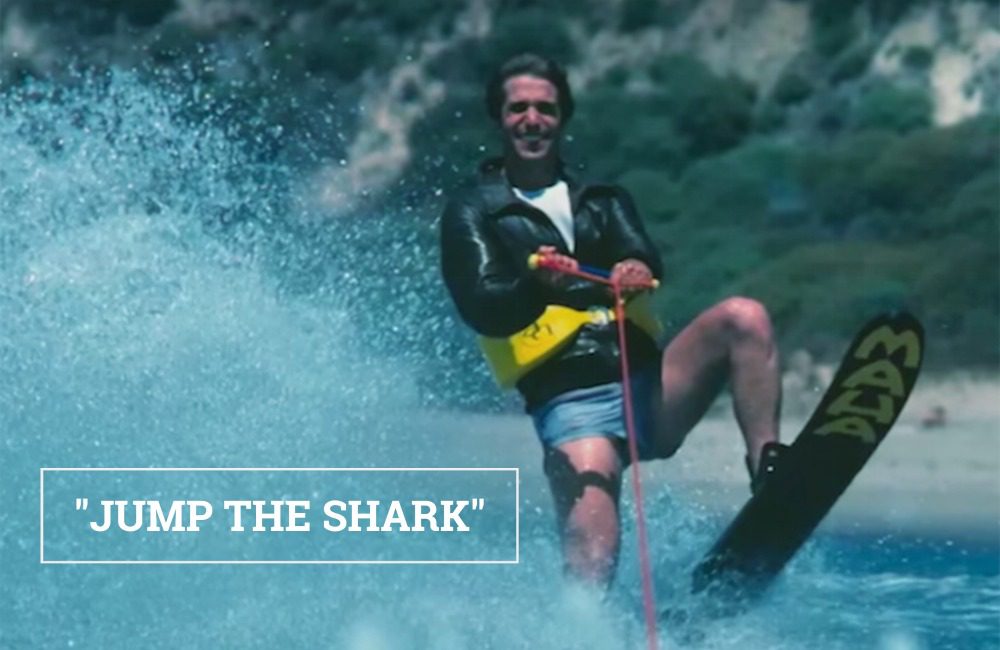 Each week here at the Australian Writers’ Centre, we dissect and discuss, contort and retort, ask and gasp at the English language and all its rules, regulations and ridiculousness. It’s a celebration of language, masquerading as a passive-aggressive whinge about words and weirdness. This week, there's a shark attack…

Q: Hi AWC, where did the phrase “jump the shark” come from? I hear it a lot.

Q: No, usually about TV shows or bands or celebrities.

A: Ah yep. It kind of means two things but both are related. If something has “jumped the shark” it tends to refer to something or someone that has peaked and is now in a decline in terms of popularity.

A: But it can also refer to the act of doing something outlandish, out of character or gimmicky – often either in response to a declining popularity or the very thing that sparks that decline. This is also called the “jumping the shark moment”.

Q: Ah, well that makes sense. Except why call it “jumping the shark”?

A: That’s from Happy Days.

Q: Don’t get all nostalgic on me – we know things aren’t great right now but…

Q: Still not getting the shark reference.

A: It happened at the start of its fifth season in 1977, when the show – usually set in Milwaukee, Wisconsin – went to Hollywood. And one of these special episodes had popular character Fonzie water-skiing over a shark while still wearing his trademark leather jacket.

Q: Am I right in guessing this wasn’t a normal storyline?

Q: So it was a stunt performed due to the show declining in ratings?

A: No, the ratings were huge for Happy Days throughout the ’70s – with more than 31 million people watching that particular season.

Q: So then it must have been the stunt that sparked a decline in ratings then?

A: Um, again, no. The ratings of Happy Days continued to be excellent, only dipping in the final year some six years later.

Q; Then HOW exactly was this a “jumping the shark moment” then?

A: Well, because he jumped a shark! The original jumping of the shark that resulted in the idiom was not related to a ratings slump at all, but it still broke with the usual tone of the show by being designed simply to show off Fonzie actor Henry Winkler’s real-life water-skiing skills.

Q: So when did the phrase “jumping the shark” become a thing?

A: The idiom was first used in 1985 by two University of Michigan roommates, Jon Heim and Sean Connolly, when talking about TV shows that had gone downhill. They coined the act of “jumping the shark” as being the moment when you as a viewer knew that things would never be the same. In the late ’90s, Heim made a “jumpingtheshark.com” website listing hundreds of shows and their own shark-jumping moments.

A: Well, actually no. Many say that the website itself jumped the shark when it was bought out by TV Guide in the early 2000s.

Q: So, what are some other famous “jumping the shark” moments?

A: Well, that can depend on your taste, but some of the more universal ones concern killing off or marrying off major characters in shows like Dexter, Downton Abbey, House of Cards, Homeland, Two and a Half Men, The Office, X-Files and Friends, not to mention baffling plot twists in shows like Lost, Dallas and Game of Thrones.

Q: But the idiom can refer to things other than TV shows too, right?

A: Yep. As we said earlier, if an event, company, group, show or person exhibits a sudden change that is met with rebuke, the water skis may come out.

Q: Surely the Jaws franchise must have jumped the shark?

A: Some would say everything other than the original movie fits that description – while the 1983 Jaws 3-D sequel is notably panned. As for other movie franchises, we’re going to need a bigger boat to cover the many bad sequels that would qualify. In fact, a new term of “nuking the fridge” was created in response to the absurd fourth Indiana Jones movie back in 2008.

Q: I’m starting to think that anything that is widely popular will jump the shark eventually.

A: Yeah, in today’s cynical culture that’s about right – as most things start declining eventually. The fact that the original shark jumping was actually performed at the height of that show’s popularity is a little misleading.

Q: I’m feeling paranoid all of a sudden. Do you feel that after six years this Q&A column has jumped the shark now that we’ve started talking about the origin of things like “jumping the shark”?

A: No, we’re still good. There’s plenty of good material still to come.

A: Now if you’d just hand us that watermelon, we will now proceed to carve it into an apostrophe while riding a unicycle along this high wire…