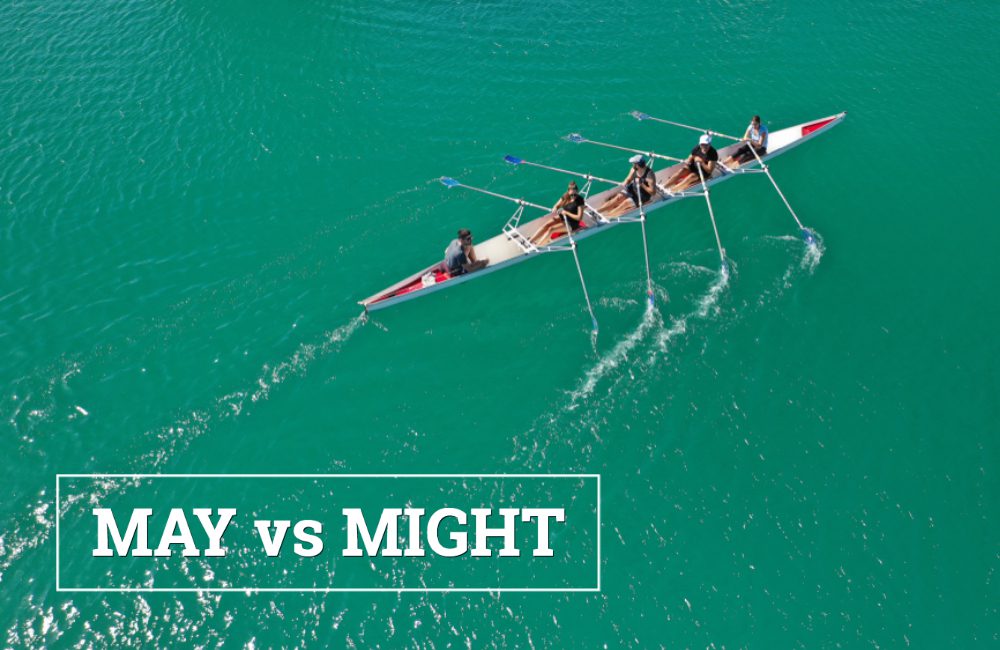 Each week here at the Australian Writers’ Centre, we dissect and discuss, contort and retort, ask and gasp at the English language and all its rules, regulations and ridiculousness. It’s a celebration of language, masquerading as a passive-aggressive whinge about words and weirdness. This week, come what might, it's may day…

Q: Hey AWC, we had an email this week from someone keen for us to explore the difference between ‘may’ and ‘might’.

Q: I thought you might never ask. Let’s do it.

A: For starters, these words belong to a select club.

Q: Is it the Freemasons?

Q: That’s a shame. I’m still trying to figure out what they do.

A: This select club is for special “modal verbs” – a bunch of words that help to express things like ability, possibility or permission.

Q: So if we’re discussing the possibility of something, do we use “may” or “might”?

A: You’ll be pleased to know that there IS a rule here. While both deal with uncertainty, “may” is used if something is MORE likely to happen, whereas “might” is less likely.

Q: I may need a few examples.

A: Of course. So if you train hard enough, you might qualify for next year’s Olympic rowing team. And if you don’t, you may end up watching the final on your couch at home.

Q: Are you sure? Because if I substitute the other word in its place, it still sounds okay.

A: Did you come here for rules or not?

A: Apology accepted. “May” deals mainly in possibles, while “might” is more about hypotheticals. If it’s more likely to happen, go with “may”, whereas the less likely things are a “mighty stretch”.

Q: Are there any other rules?

A: Yep. “Might” actually started life as the past tense of “may” – so should continue to be used in all past tense situations. The Macquarie Dictionary lists examples: “they agreed we might go” or “he died so that we might live”.

Q: Are we done with the rules yet?

A: One more. It relates to permission – but it’s not really a rule, just more of a caution. While both words can be used, we recommend using “may” when asking permission, such as “may I have this dance?” or “may I be excused?”. However, things get confusing with negatives.

A: “I may not go to the Olympics.” Here it’s unclear whether this is saying that you may not make the team OR whether someone is preventing you from going. In these cases, it’s a good idea to substitute “may” with “might” to remove any ambiguity. “I might not go to the Olympics” is the result.

Q: So to recap – “may” is for things more likely and more present than “might” but “might” can help when using “may” gives the wrong impression.

Q: Speaking of confusing, do the idiom phrases “may as well” and “might as well” mean the same thing?

A: Actually yes they do – both used to suggest that something should be done or accepted because there's no other better alternative or good reason not to do it. Some evidence points to “might as well” being a less enthusiastic variant of the two. It’s also more popular – which is probably why it’s found in a bunch of song lyrics.

Q: Well, thanks for that. I might not know everything, but I may have grasped this concept today.

PrevPreviousEp 332 Meet Christine Bell, author of ‘No Small Shame’.
Next5 ways to write your novel while juggling your day jobNext