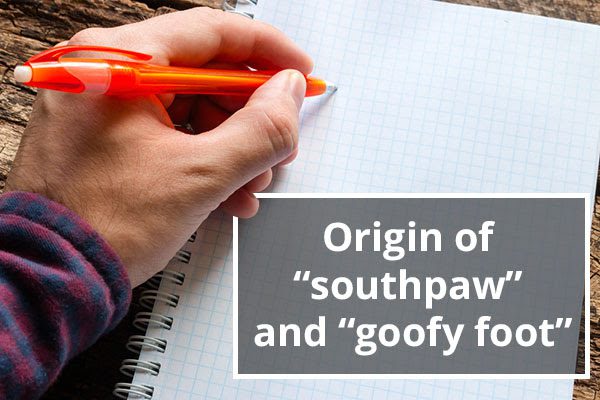 Each week here at the Australian Writers’ Centre, we dissect and discuss, contort and retort, ask and gasp at the English language and all its rules, regulations and ridiculousness. It’s a celebration of language, masquerading as a passive-aggressive whinge about words and weirdness. This week, it's all about lefties…

Q: Hey AWC, did you know it was International Left-handers Day earlier this week?

A: We did not. When is Right-handers Day?

A: Okay, that’s fair. So, is your question about left-handers?

Q: It sure is. The other day I was reading about a left-handed tennis player and they referred to him as a “southpaw”. Can you explain?

A: Ah yes – well, the singular term “southpaw” was coined in baseball in the 1880s – specifically relating to Chicago’s main field which had its diamond positioned with the batter in the west. A left-handed pitcher therefore had his pitching hand – his “paw” – on the south side of the diamond.

A: Exactly. Note however that calling your left hand your “south paw” had actually been around in boxing slang since the 1840s. And fittingly, it’s boxing that most commonly uses the term “southpaw” today.

Q: So how did it make its way to tennis?

A: As time has gone by, writers have thrown the “southpaw” blanket over all left-handed people.

Q: Does the dictionary agree?

A: Absolutely. Macquarie Dictionary lists it as colloquial, and has its first definition as a noun – “a person who is left-handed”. It follows this up with specifically the boxing term (“a boxer who stands with the right leg and right arm forward”) before rounding off with an adjective also meaning “left-handed”.

Q: Is it true that the word “sinister” also relates to left-handers?

A: Yep. During the Middle Ages, anything related to the left was considered evil. The Latin term “sinister” had originally had no such connotations, simply meaning “on the left side” while “dexter” meant the right. But once the left side was linked to unlucky omens, it was all downhill from there.

Q: People were burnt at the stake for being left-handed, weren’t they?

A: They sure were. And right up until the 20th century, left-handedness was often associated with crime, low intelligence and even perversion. All of it debunked.

Q: My brother debunked when he was 11 – rolled over in his sleep and broke his arm when he hit the ground. I was in the bed below and saw it all.

A: Um, no, we meant “debunked” as in to disprove or challenge something.

Q: Oh, um, of course you did, ahem. So, I’ve heard that left-handed people are more creative. Is that true?

A: Nope – you can throw that one off the top bunk too.

A: Some argue that being left-handed in sport can be useful as there aren’t as many left handers or left-footed kickers, but that’s about it.

Q: What proportion of the world’s population is left-handed?

A: Um, sure, ah… they usually have names like Ocean, Taj or Bodhi and like to sit around bonfires and take long walks on the beach in wetsuits…

Q: No silly, I meant tell me about leftie surfers. Why are they called “goofy”?

A: Oh! Well, to be “goofy” or “goofy footed” is a similar thing to boxing – in that you plant your right foot forward on your surfboard (or skateboard, or snowboard). Some cite the origin as the 1937 Disney cartoon called Hawaiian Holiday which featured cartoon dog Goofy riding in such a stance – and is depicted as such in the poster.

A: Surfing historians think it was more likely to have been the early ‘60s and the term “goofy” simply derived from its actual meaning of being a bit weird or foolish. At the time, most led with their left foot, so to lead with your right was deemed somewhat “goofy”. Oddly, these days it’s not that unusual – around 40% of all board riders – snow, street or surf – are what you’d call “goofy footed” despite only 10% being left-handed.

A: Genetics sure is a Mickey Mouse operation…

PrevPreviousEp 293 We chat to Tony Park, bestselling author of ‘Ghosts of the Past’
NextQueensland Writing Fellowships now openNext