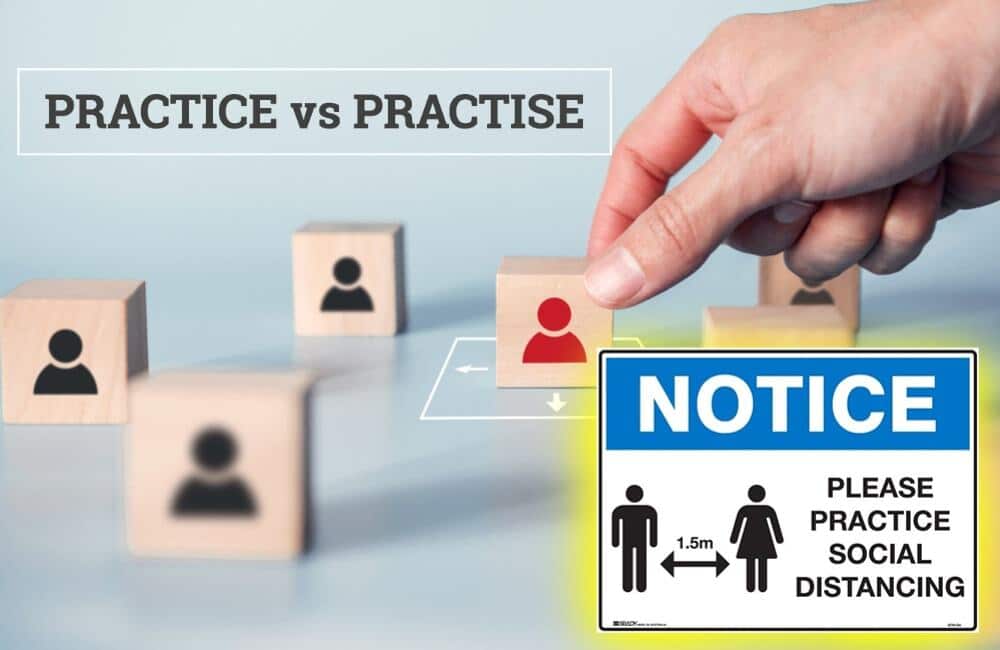 Each week here at the Australian Writers’ Centre, we dissect and discuss, contort and retort, ask and gasp at the English language and all its rules, regulations and ridiculousness. It’s a celebration of language, masquerading as a passive-aggressive whinge about words and weirdness. This week, we’re being told to continue to “practice social distancing”. Or should that be “practise” with an S?

Q: Hi AWC, I saw the above sign today reminding me to “please practice social distancing”. I have two problems with this.

A: Is one of them that the people have no necks?

Q: No, but that’s a very good point. That’s probably an even bigger health issue.

A: So what were YOUR two problems?

Q: Well, the first is that I feel like I’ve been practising social distancing so much lately that I must have perfected it by now!

Q: The second is that um, shouldn’t it actually be “practise” social distancing, with an S?

A: Ah, this old chestnut.

A: Here in Australia, yes. The verb is always “practise” while the noun is “practice” – it’s a simple enough rule.

Q: Why do so many get it wrong then?

A: It’s America’s fault. They like keeping things simple – using “practice” for both noun and verb, so that’s probably where the sign came from. But everywhere else including the UK, Australia, New Zealand and even Canada opt for the two different versions.

Q: So why DO we have an S version?

Q: Ugh. You can do better than that.

A: Okay. The word originally came from a combo of Old French “pratiser” and Latin “practicare” so the spelling flip-flopped until English boffins eventually decided to group confusing noun/verbs into –ce/–se endings respectively. So this gave us words like practice/practise, licence/license (e.g. “you need a licence to license your premises”) or even prophecy/prophesy (e.g. “the prophecy will prophesy the future”).

Q: Any advice on remembering which is noun and which is verb?

A: You’ve just said it! Think of “advice” (noun) and “advise” (verb). They work in exactly the same way, but conveniently have different sounds so it’s not as confusing.

Q: Okay, so I can “practise the banjo” to get better. But I don’t want a doctor “practising medicine” – they should already know their stuff!

A: Before you rush off to get a second opinion, know that the verb “practise” has three distinct definitions. The first is repetition to improve a skill – such as “practising the banjo”. Another is similar to ‘observe’, e.g. “practise social distancing”. The third – and original meaning by the way – is to pursue a profession, such as “practising law”.

Q: Can you only practise law or medicine?

A: No – although back in the 1400s when it was first defined, medicine, law and alchemy were about the only so-called “professions”. Nowadays however, there are many professions that call themselves practices including dental, engineering and architecture.

Q: My aunt June works in an accounting practice!

A: Oh really? How does she find it?

Q: Originally she used Google Maps, but these days she just knows the way.

Q: So to recap, outside the US, a doctor practises medicine at a medical practice?

A: That’s right. She or he would also practise social distancing and follow best practice guidelines. Verb is S, noun is C – easy!

A: It still follows the rules. It’s talking about the concept of “practice” (a noun) rather than the act of “practising”.

Q: And “practise what you preach”?

A: It’s S because this time you’re actually practising (as in observing or following).

Q: So if I see something written as “practice” I should really double check as it could be American and need converting to the verb “practise”?

A: That’s right! It’s not hard to do – it just takes a little practice…