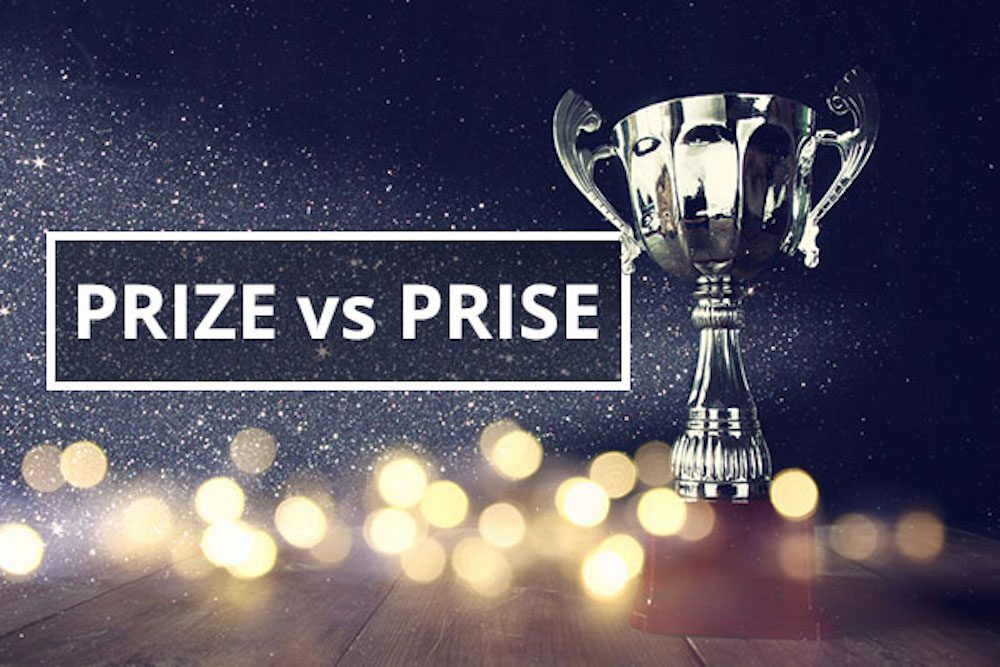 Each week here at the Australian Writers’ Centre, we dissect and discuss, contort and retort, ask and gasp at the English language and all its rules, regulations and ridiculousness. It’s a celebration of language, masquerading as a passive-aggressive whinge about words and weirdness. This week, we have our eyes on the prize…

Q: Hi AWC, my friend wrote that “they couldn’t prize the trophy from his hand” – are they wrong?

A: We don’t mean to pry, but what was the trophy for?

Q: The trophy was so that they could tell who the winner was.

A: No, we meant what was— never mind.

A: Clearly everyone is familiar with the word “prize” – in fact a trophy is indeed a type of prize.

Q: Yes, yes. But does it have other meanings?

Q: Ugh, here we go with “because English” again…

A: Haha, yes. Is your friend American by chance?

Q: Well, she is American, but I’m not sure chance played a part. Her parents knew exactly what they were doing.

A: Um, okay. But that could explain it. You’re both right.

A: Allow us to explain, with the help of this thick atlas. <THUD>

Q: That is indeed a thick atlas.

A: In America, they use the word “prize” for everything – including both the award and the act of forcing something open. However, in the rest of the English speaking world, we still award “prizes” but use the spelling “prise” for the verb action. Macquarie Dictionary defines “prise” as ‘to raise, move, or force with or as with a lever’.

A: Actually, pry in this sense (not the nosey neighbour kind) is actually a “back formation” – meaning it came later. Much later in fact. “Prise” had been around since the 1300s, while “pry” was first recorded in 1823.

Q: So Americans don’t use “prise” at all?

A: Nope. The Z spelling came along during the 1600s, conveniently coinciding with the first British pilgrims travelling to America. They would later prefer the older Greek -ize suffix over the British -ise, but that’s not related to the etymology of this word.

Q: What about the word “surprise”? Is that related?

A: Yes, it looks like Old French played a part in taking “sur” – meaning “over” and the seizing/grasping definition of “prise” to apply “surprise” to early military contexts – meaning to take over a place suddenly.

A: It wasn’t until the 1880s that being excited by something unexpected was “to be surprised”.

Q: Ah of course, because that was the same time electricity was invented.

Q: Well, until then, people couldn’t jump out from behind the couch and yell “surprise!” while switching on the lights. Think about it – if they had to take time lighting gas lamps, the moment would have been lost and very awkward.

Q: Hey wait, earlier you said you were going to explain the American-British difference in spelling with the help of that thick atlas. But you never even opened it.

A: That’s right. We superglued the pages together. Now, if you were in America you’d try to prize them open. But here, you’ll simply have to prise them apart.

Q: What a waste of a good atlas.

Q: So why does the US still spell “surprise” or “enterprise” with an S, not a Z?

A: There are quite a few words like this, e.g disguise, exercise, chastise, supervise, improvise, despise etc. The short answer is that while they may look like the others, they don’t actually contain a -ise/-ize suffix. These words are spelt the same all over the world – from Glasgow to Chicago; Toronto to Traralgon; New York to New Zealand.

Q: I’ll have to take your word for it. Someone glued my atlas together…

PrevPreviousCOMP CLOSED: Double passes to ‘Who You Think I Am’
Next6 ways to prepare so you get the most out of attending a writers’ festivalNext