Q&A: Sell like hotcakes, sell your soul, sell yourself short 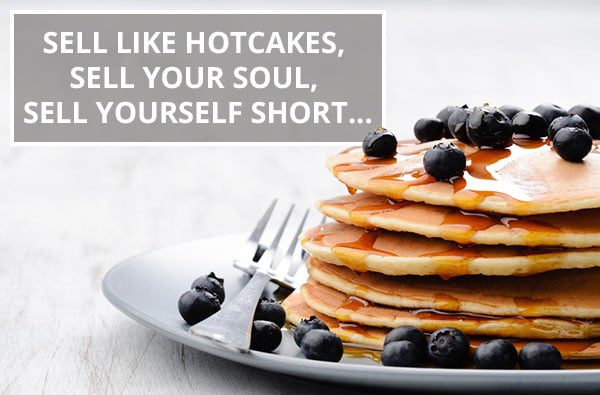 Each week here at the Australian Writers’ Centre, we dissect and discuss, contort and retort, ask and gasp at the English language and all its rules, regulations and ridiculousness. It’s a celebration of language, masquerading as a passive-aggressive whinge about words and weirdness. This week we're discussing sayings with “sell” in them…

Q: Hey AWC, can we explore the origins of sayings with the word “SELL” in them?

Q: Let’s start with “Sell your soul” – which often includes the ending “…to the devil”.

A: Okay, this one has German origins – dating way back to the 1500s and a chap named Faust who agreed to sell his soul to the Devil in exchange for magical powers. That legend got contorted through the centuries, and today acts as a metaphor rather than an actual sign-on-the-dotted-line transaction.

A: To sell your soul (to the devil) simply means to abandon your values or morals in return for some highly desired benefit – usually money, power or fame and so on. Naturally, it’s a term often used in business ladder climbing.

A: No, not actual ladders. Climbing the corporate ladder! Sometimes it does actually involve a contract, where the “devil” is a music producer and the artist is selling their soul to become famous etc.

Q: Okay, next one. What about “Sell yourself short”?

A: This one’s even older – dating back from the 14th century and originally related to stock markets.

Q: Did they have things like Wall Street back then?

A: Well, not Wall Street because America wasn’t a thing. But they definitely had banks and the early forms of stockbrokers. France and Italy were the hotspots for this kind of trading, with the first paper shares issued in 1602.

A: Um, anyway. Most people buy stock and hope the price increases so they can sell again for a profit – that’s called selling long. But others would sell borrowed stock for a decreased price and keep the difference – thus selling short.

Q: When did it become an idiom?

Q: What if they actually ARE a bad dancer?

A: Then there would probably be an awkward silence instead.

Q: Anyway, so tell me about something that “sells like hotcakes”…

A: First thing to note is that this originated in America in the 1800s, so it’s not “hot cakes” fresh from the oven, rather it’s “hotcakes” – as in pancakes. Apparently they were very popular at church bake sales, where the congregation would buy them quickly before they went cold. The term came to mean anything selling fast around 1840 or so.

Q: What about “selling someone down the river”?

A: This one used to be literal in the days of slaves in the US – up until the 1860s. Slaves were indeed sold down the Mississippi River to the cotton plantations in the Deep South. Once slavery was abolished, it took some time for it to gain its new figurative definition of betraying someone – first noted in 1927.

Q: And finally, how long have “sell-by dates” been a thing?

A: Actually quite recently. Prior to the 1970s, most goods were either canned (they last forever) or fresh. But an explosion of processed and packaged goods saw the term “sell-by date” become a thing in 1973 – with the often misleading or arbitrary dates stamped onto packaging ever since.

Q: I think this conversation is nearing its expiration date.

A: Well then, in honour of this chat about “sell”, we’ll simply say “good buy”…