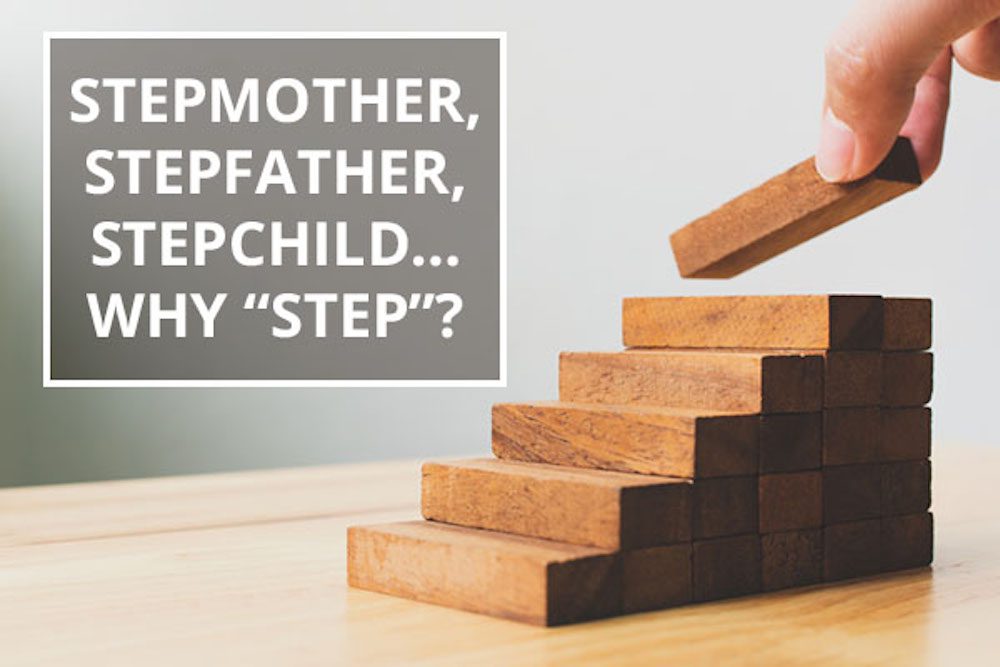 Each week here at the Australian Writers’ Centre, we dissect and discuss, contort and retort, ask and gasp at the English language and all its rules, regulations and ridiculousness. It’s a celebration of language, masquerading as a passive-aggressive whinge about words and weirdness. This week, we're taking things step by step…

Q: Hi AWC, how was Mother’s Day for you?

A: Just fine – and good to see you’re using the correct way of spelling “Mother’s Day” and “Father’s Day”; the apostrophe in the right place!

Q: I had a question about stepmothers this week.

A: Is it why are they always wicked in fairy tales?

Q: Well no, but that is a good question. It’s actually about where the “step” came from in stepmother, stepfather, stepdaughter etc.

A: The term only started being used in the 1950s, when photographers and genealogists decided that in family photos, anyone who wasn’t a blood relation had to stand on a stepstool to make them easier to identify.

A: Of course not, that’s complete nonsense.

A: The actual term started with the kids – via the Old English “steopchild” way back around the 8th century.

Q: How strange, it seems such a modern thing to have stepfamilies. Did it mean the same thing back then?

A: It didn’t entirely. In fact, if you were kicking around ye olde times as a steopchild, it meant specifically that you were an orphan. Your parents didn’t run off with anyone – they died.

Q: Well, in that case, why didn’t they just called them orphans instead!

A: Well, Old English got it from the Proto-Germanic (via Dutch, Norse and a few other cold beardy languages) word “steupa” – to do with “loss” or being bereft of some kind – clearly relevant for an orphan. This was related to the word “astiepan” – meaning “to deprive of parents”. So basically, it’s not your typical nuclear family.

Q: Sidebar – why is it called a “nuclear” family anyway? Surely it’s not because at Christmas all the family members react and have meltdowns?

A: Cute, but no. The word “nuclear” in an atomic, blasty, melty sense has been around since 1841. Meanwhile, the term “Nuclear family” is a sociological term (relating to the “central” nucleus of an atom) and only coined in 1949 by an American anthropologist.

Q: Right, good to know. So, back to stepchildren.

A: Yes, so traditionally to be a stepchild meant that your parents were dead. And stepmothers and stepfathers were those who cared for these orphans.

A: Sure, but back then, at least one biological parent had to be dead for “step-anything” to kick in. These days, a death is not needed for a stepfamily to come about. More often it’s through divorce.

Q: Ahhh okay, I get it. So it’s like Luke Skywalker’s stepparents in Star Wars, yes?

A: Well, not really – that was his aunt and uncle due to him being orphaned. So that’s still the old meaning, not the newer one.

Q: Then why does Obi-Wan say “divorce is strong in this one”? Bahahaha.

A: …. That’s ten seconds of our life we’re never getting back.

Q: Haha, sorry. Oh, one last question. I see something like “stepson” written also as “step-son” with a hyphen. Which is best?

A: Good question. The original spelling up until around the 1800s favoured the hyphen, but not today. The Macquarie Dictionary only recognises the non-hyphen versions and we suggest you do the same. The only exception might be in describing unusual step combos such as “step-uncle” etc.

Q: Good to know. So, anything further to add on stepfamilies?

A: Not really, except just to say that if you’re not biologically related yet you’re in an official parent/child/sibling relationship, then “step” right up!

Q: Great! Thanks for this step-by-step guide…

PrevPreviousEp 281 Meet Paige Toon, bestselling author of ‘If You Could Go Anywhere’
NextCOMP CLOSED: ‘Getting There’ by Instagram star – Mari AndrewNext