Q&A: The origin of “couch potato” 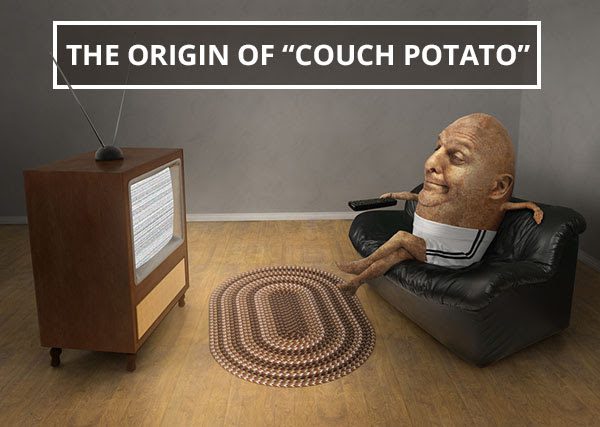 Each week here at the Australian Writers’ Centre, we dissect and discuss, contort and retort, ask and gasp at the English language and all its rules, regulations and ridiculousness. It’s a celebration of language, masquerading as a passive-aggressive whinge about words and weirdness. This week, we're getting comfortable on the couch…

Q: Hi AWC, do you have plans for this weekend?

Q: I was planning to be a couch potato, but then something occurred to me.

A: What was that?

Q: Where did the term “couch potato” come from? It must be relatively recent, right?

A: Well, it’s been around since the late 1970s. But it famously has an exact date of origin. Not many idioms have that level of preciseness.

A: Well, that date has its own origin story.

A: You see, back in the 1960s and ‘70s, two Californians named Robert Armstrong and Tom Iacino were part of a group of well, lazy men, who would get together and watch television.

A: Back then it was quite a novelty to just binge TV from the couch like that. And with the rise of healthy movements, jogging and so on, in the 1970s, Robert and Tom humorously belonged to a group known as the Boob Tubers.

Q: What, they wore revealing outfits?

A: Haha, well yes, outside America, we think of a tube top, while Americans have since the 1960s used “boob tube” as a colloquial name for the television. Tube being the TV itself, and a “boob” since 1909 being American slang for a “stupid person”. People thought only stupid people watched TV all day.

Q: My, how times have changed.

Q: Probably helps explain how the name YouTube came about.

A: Ironically, the founders of YouTube in 2005 were inspired to create the platform after having difficulty locating clips of Janet Jackson’s famous Superbowl “wardrobe malfunction”. The ironic part being it may not have happened if she was wearing a boob tube.

Q: Cute. Wait, was that the origin of the term “wardrobe malfunction”?

A: It sure was. Justin Timberlake coined it popularly when referring to the incident.

Q: Right, we’ve gone on a tangent. Back to the couch potatoes please!

A: Okay. So, on 15 July 1976, Tom apparently came up with the term randomly while on the phone, and Robert – a cartoonist – made it famous by renaming their group the Couch Potatoes and drawing the first “couch potato” characters.

Q: Such innocent times. So he just “came up with it”?

A: Some believe it was a pun on the “boob tuber” – with a “tuber” being the edible part of a potato. Others simply suggest it’s in reference to the common snack of potato chips while watching TV on the couch. Or even as a reference to being in a “vegetative state”.

Q: So, how did the phrase take off exactly?

A: Good question. Not much happened until 1979, when the group got news coverage after creating a parade float of “couch potatoes”. But the real turning point was 1983 – with the publication of The Official Couch Potato Handbook, which Robert illustrated.

Q: And the rest is history.

A: That’s right. Robert had actually known early on that they were onto something, and sought to trademark the term. But it didn’t stick once it became part of popular culture.

Q: How strange that there was once a time when people needed to come up with a term for people who sit all day and watch television… These days, I think we call them humans.

A: And even stranger to think that in 40-odd years, people will look back on right now as a quaint, simpler time…