Happy birthday America; 238 years old and looking good (although it could be all that Botox you've had done on your West coast).

You truly are the land of the free. Home of the brave. Land of colorful humor, high fiber, cozy pajamas and gray aging neighbors. Home of the 50-story theaters, favorite jewelry, organized travelers, snowplows, sizable paychecks and open dialog.

Sigh. Land of the red-underlined-word. Okay America, it's one thing to take a stroll on the sidewalk with your fanny pack during Fall. (Period.) But why, when it comes to spelling, is it You (Ess-Aye) vs The Rest of the World?

Sure, one could argue that when you get to the age of 238, you'll spell things however the hell you want. But for a less-cranky explanation, we need a quick history lesson.

Back in the 18th Century, when America was still in napp– diapers, the English language was busy undergoing a bit of an upheaval itself. After centuries of shifting vowels and Renaissance word-borrowing, English resembled one of those eclectic second-hand shops (where everything's overpriced because it's called ‘vintage'). And yet it was a universal kind of crazy. When the new settlers of America spoke (“listen here, Pilgrims”…) or if they wrote, it was identical to England. Everyone marched to the same lexical drum that was Samuel Johnson's 1755 bestseller, A Dictionary of the English Language.

You said this would be a quick lesson

Sorry. Okay, so by the time the U.S. Declaration of Independence was signed in 1776, everyone was quite literally on the same page. Oddly, the modern-U.S. spelling ‘honor' can be seen on it – and not ‘honour' as it would have been at the time – but this was merely a retrospectively convenient typo. (A good proofreader was impossible to find back in the 1770s.) And yet, the times, they were a changin', thanks to one man – Noah Webster. 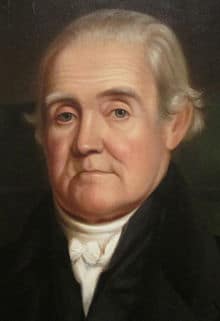 Long considered the ‘father' of many modern American spellings, Noah Webster wasn't a fan of the Johnson dictionary. In 1789, around the time America began riding their horses on the opposite side of the road, he announced that “Great Britain, whose children we are, and whose language we speak, should no longer be our standard; for the taste of her writers is already corrupted, and her language on the decline.” Ouch. Burn, Great Britain.

It was a bold new America. It needed its own voice. So he wrote his own dictionary (everyone was doing it back then), and in 1828 finally published An American Dictionary of the English Language. It pretty much set the tone for American spelling ever since.

It's probably worth mentioning that Webster didn't just decide, “hey guys let's spell words a little different, to, you know, be all quirky and mysterious.” Men like Johnson and Webster were lexicographers – closely examining the origins and influences of English to choose the best ways to spell things. Specifically, the trend was that American spellings should more closely reflect the phonetics – and read how they sounded, without ambiguity or superfluity.

When Webster published his book in 1828, he preferred the Latin origin ‘–or' for words like color, favorite, neighbor, honor, humor, flavor, rumor and labor. Meanwhile, Johnson had always championed ‘–our' spellings from Old French words. Webster probably had the right idea when it came to suffixes, because ‘–or' requires no amendments, whereas ‘–our' chops and changes more often than a politician – keeping the ‘u' (humourless) or dropping it (humorous) depending on the usage.
Speaking of politicians, here in Australia, we follow ‘–our' convention but spell it Labor Party. This anomaly occurred after it switched to reflect the American Labor Movement of the early 20th Century.

Another red-underlined spellcheck fave is the “ization'” of American spelling. Words like organize, recognize, realize, as well as analyze, paralyze etc. Again, it's a showdown between the French ‘s' and Greek+Latin ‘z' origin stories, and once again Webster didn’t like the French. His overwhelming influence has seen the –ize the only accepted form in the USA, whereas the rest of the world often wrings its hands with when to use both. The –ise form is most common everywhere else, however –ize is seen increasingly. (One reason could be software such as Microsoft Word shipping with US English as default.)

Why do Americans insist on ‘center', ‘caliber', ‘fiber', ‘liter' and so on? Again, it's all about simplifying language. In French, Greek or Latin, most of the words started out as ‘-re' and America changed everything to –er, while British English was more selective (i.e. things like Decembre, entre and chaptre were changed, but most others remain).
By having –er at the end, America simplified inflections like –ing and –ed, while British counterparts have had to contend with many exceptions. Words like ‘massacre' or ‘mediocre' keep the –re in American, as the hard c sound in –cre is needed to differentiate from an s sound in –cer. There is method to the madness.

Noah Webster and co didn't like extra letters for the sake of it. Especially extra Ls. Therefore, words like travel, label, dial and signal simply got –ed, –ing or –est added on, and no double L as the British use. A similar thing with the word ‘jewel' – a jeweler in America sells jewelry, while a British jeweller sells jewellery.

Yet when a root word started off with a double L (skill, fill, roll etc), America saw no need to drop anything – those Ls were there to begin with. This is where we see the complete opposite of above, where Americans write ‘fulfill' or ‘enroll' while British have a single L!

See a trend emerging? Americans realised early on that English is pretty messed up, and they had a golden opportunity to fix some of it. (Webster at this point is looking a lot less like an anarchist and more like a genius.) Take the words ‘defense' and ‘offense' – spelt (they'd say “spelled” in U.S.!) with the ‘s' in America, but with a ‘c' (‘defence' and ‘offence') everywhere else, same sound. And yet everyone spells ‘defensive’ and ‘offensive’ with the ‘s'.

It cud hav been wors

Noah Webster may have got the ball rolling, but many other changes came about via the Simplified Spelling Board, between 1906 and 1920. They recommended a fire sale of sorts – dropping silent letters to speed up word evolution. ‘Addressed' would become ‘addrest', ‘have' to ‘hav' and ‘although' to ‘altho' etc. Most were rejected outright, but some of the suggestions took hold. For example, you'll never see a dialogue-filled monologue about a catalogue in America – they dropped the redundant ‘ue'. (A similar thing happened with ‘programme' to ‘program' and ‘tonne' to ‘ton'.)

And of course in today's SMS text-speak generation, exactly 100 years on, we see that even shorter forms of the rejected simplified versions finally found an audience!

So, happy 4th of July America. Your early founders' desire for a different way of doing things, and your continued world influence, has resulted in a unique legacy that continues to keep the spellchecking industry in business. And it would seem that the new-fangled, star-spangled logic of many of the American English options has seen more and more words are evolving that way than in the opposite direction. It's here to stay – from dawn's early light to twilight's last gleaming. Need to brush up on your (Australian) grammar skills? We regularly run Grammar and Punctuation courses in Sydney.