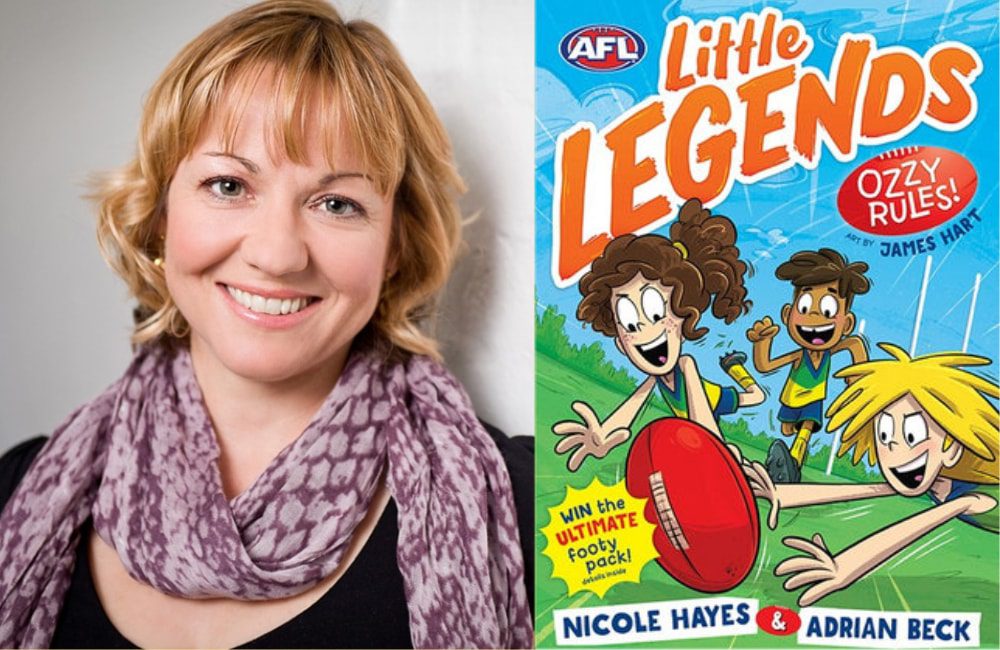 Award-winning author, speaker and Australian Writers’ Centre presenter Nicole Hayes has made no secret of her passion for AFL. Much of her back catalogue is football-adjacent, and she’s a founding member of weekly ABC podcast The Outer Sanctum.

Nicole’s latest project speaks to a different audience from her previous young adult novels. She has teamed up with children’s author Adrian Beck for the Little Legends junior fiction series, aimed at readers between 6 to 9 years old. It’s the only junior fiction series ever to be officially approved by the AFL, and the first book – Ozzy Rules – was released in April 2020.

A new generation of football fans

After she was approached by publisher Hardie Grant Egmont, which had the AFL licence for the series, working with Adrian was an obvious choice, Nicole says. She knew from meeting him previously that he liked writing about football, and when they sat down together he came prepared with ideas.

“Adrian already had the broad concept of Little Legends, and I think he had the Ozzy Rules title up his sleeve, too,” Nicole says. “But we thrashed out the characters, some story ideas, and pulled a pitch together for Hardie Grant Egmont. They took it to the AFL, and pretty soon it was full steam ahead! The publisher then brought James Hart on board to illustrate, and suddenly we had a kids’ footy book Dream Team!”

Ozzy Rules, which introduces keen footballing twins Oz and Ellie along with their talented cousin Sanjay, is the first book to come in a series of four. The first three books have already been drafted, with books 3 and 4 scheduled for publication in 2021, and Nicole is crossing her fingers that the current uncertainty around this year’s AFL season won’t impact the roll-out of the series too much.

“Hopefully things settle back soon and this can all happen as scheduled. Ideally, we can keep going. We have heaps of ideas and such rich fun characters to build stories around.”

Two heads are better than one

It’s not hard to imagine that collaborating on a book could present challenges, but Nicole says she and Adrian had complementary – rather than competing – strengths and weaknesses. “Adrian is a natural at structure and action writing, while I feel more comfortable doing the character work, and playing around with dialogue. Adrian is ridiculously funny too.”

The two writers would block out the story together, and then took it in turns to draft the story, tightening the narrative and adding humour as they went. The first two books underwent four or five rounds to get them publisher-ready. Young adult author and editor Melissa Keil edited the books, and Nicole says her feedback really “helped round out the stories”.

“With each book we get more confident in the process but also in the world we’re creating,” she says. “James’s illustrations, on top of it all, have given us a clearer sense of the characters and the all round fun involved in their stories. It’s been a thoroughly satisfying process.”

A chance to connect

Beyond her own writing, Nicole is one of the presenters of the Australian Writers' Centre’s Creative Writing Stage 1 course. Whether it’s online or in person over the course of a weekend, Nicole says she gets a lot out of getting to know other authors.

“I know it’s not super common for a writer, but I’m actually someone who enjoys being with other people. Meeting aspiring writers, new students and old, is one of the great releases for me, given how much time I spend on my own at my desk,” she says. “Plus, the students at AWC are invariably delightful.”