Never in a million years did Amy Adeney think that she would be a published author one day. She had a varied career as a fitness instructor, PR executive, and primary school teacher before finally discovering her creative side. She has now published seven books for children – and it all started with a writing exercise during a course at the Australian Writers’ Centre.

“My debut picture book, Turning Cartwheels (EK Books, 2021), actually began its life as an exercise in the AWC Writing Picture Books course!” Amy says. Her tutor, Cathie Tasker, provided Amy with feedback that made her realise that her story idea had potential. “Cathie’s feedback became part of my pitch for the book, and even formed the basis of the book’s description in the EK Books catalogue.”

Since publishing Turning Cartwheels, Amy has gone on to publish her junior fiction series Tilda Teaches with Five Mile books.

Learning the nuts and bolts of writing for children

Amy had a lifelong passion for books and education. While working as a primary school teacher, she also ran a small business called Busy Bookworms, which was a weekly book club class for pre-schoolers.

“As a teacher and as a parent I’d always loved using books to spark discussions with kids, but I had no idea where to start if I wanted to write or publish my own,” Amy says. “When I came across the Writing Picture Books course run by the Australian Writers' Centre, it seemed like a great option to learn the nuts and bolts of the writing process.”

“By that stage I was already well underway with a junior fiction series, but I made some big changes after doing Lesley’s course, particularly around her advice to think about the way we end chapters, and to leave readers wanting more,” Amy says.

The courses provided Amy with the solid practical advice that she needed.

“I’ve done lots of courses about picture book writing (more than I’d like to admit!) but the course notes from the AWC Writing Picture Books course are the only ones I refer to regularly,” Amy says. “The fact that you can do them in your own time makes it really easy to fit in between your other commitments. What I love most about it is that it actually covers the practical nitty-gritty details of layout, story arc and structure etc, rather than the more vague, ‘airy-fairy’ content of some other courses.” 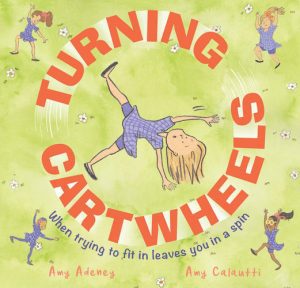 Amy’s first story idea from the Writing Picture Books course went through several rewrites, reviews and assessments before a meeting at the CYA conference in Brisbane led to a publishing deal.

“I had a manuscript assessment with Anouska Jones from EK Books,” Amy says. “I had sent her two other stories, which we discussed, but then for the last few minutes of the meeting we began chatting about our daughters, and somehow the conversation turned to the ‘frenemy’ types – popular, manipulative leaders towards whom young girls often gravitate. I mentioned that I had a manuscript dealing with that issue, and she asked me to send it to her when I got home. She requested a small rewrite, and it took a few months for her to take the book to acquisitions, but I signed the contract on New Year’s Day 2019!”

Next, Amy started work on a junior fiction series called Tilda Teaches, based on her own experience as a child.

“I was the kid who always wanted to be a teacher when she grew up,” Amy says. “I spent my weekends playing schools, making worksheets and lesson plans. For my birthday, my parents bought me teaching supplies like flash cards and ‘Good Work’ stamps. So I began to formulate some storylines around this concept, which was surprisingly easy. Some were based on things I’d done myself in primary school, like starting a class to teach my friends to jump a skipping rope at lunchtime, and others were based on things my daughter had done, like teach our babysitter to speak another language.”

Through a workshop with Billie B. Brown author Sally Rippin, Amy was able to present her series idea to Five Mile, and it grew from there.

“The first two books were released in May 2020, the third and fourth in September 2020, and the fifth and sixth in February 2021,” Amy says. “It’s been an incredible learning experience and I’ve absolutely loved every step of the process.”

A rewarding future full of words

Now that she has launched her successful publishing career, Amy is keen to keep learning and writing. She sold her business and went back to university to study writing and editing. She also won an Australian Society of Authors Award Mentorship, which allowed her to work with author and former Penguin editor Katrina Lehman.

“The manuscript we refined then attracted the attention of an agent who is now looking for a home for it, as well as for a new junior fiction series that I developed in 2020 that I’m really excited about,” Amy says.

It’s definitely full steam ahead for this busy author! And now that she has started, there’s no stopping her passion for words.

“Once I decided to give it a real go, I never realised what a lovely world I would be entering,” Amy says. “I’ve made such great friends in the industry, and the whole process has been so much more enriching than I imagined it would be.”