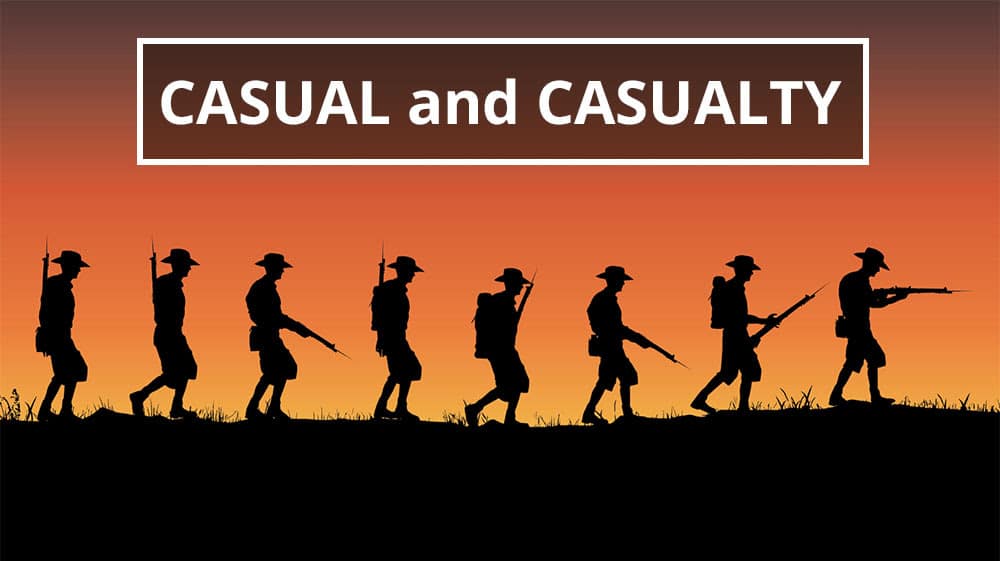 Each week here at the Australian Writers’ Centre, we dissect and discuss, contort and retort, ask and gasp at the English language and all its rules, regulations and ridiculousness. It’s a celebration of language, masquerading as a passive-aggressive whinge about words and weirdness. This week we are very casual about things.

Q: Hey, did you get a new contract? This says I’m now a casual.

A: Nope, ours hasn’t changed.

Q: That’s not fair. Without me, you’re nothing! I ask the questions.

A: Are you sure you’re the only one who can ask questions?

Q: Hmmm good question. Well I–– oh, I see what you did there.

A: Shall we begin?

Q: Everything I’ve ever known is a lie.

A: Would you say “everything”?

Q: Another question! Anyway, it was actually to do with the word “casual”.

A: This is silly. Let’s talk about “casual”.

A: Well, “casual” is an adjective meaning “relaxed or informal” (e.g. “casual wear”), “temporary” (e.g. “casual roster”) or “accidental/by chance” (e.g. “A casual meeting”). It can also be a noun to describe a temporary worker (e.g. “she’s a casual”). And it seems to have originated from Latin “casus” meaning “fall”…

Q: Fall? That doesn’t seem to match with any of the meanings!

A: Yes, the word “case” also has the same origin and is equally unrelated.

Q: Let’s not worry about that case.

A: So you’re saying that you just want to keep this casual?

A: Right, well it appears that the “fall” meaning was more in the “Christmas falls on a Tuesday” vein – relating to something happening, an occasion, chance, opportunity or event.

Q: Oh thanks, so Christmas is on a Tuesday is it? What about Easter next year, is that still a Sunday?

A: Anyway, this “happening by chance” meaning emerged and made its way to Middle French (“casuel”), arriving in English in the 14th century.

Q: But that only really fits with the “temporary” or “accidental” meanings. What about the others?

A: Good question. It wasn’t until the late 1800s that the idea of someone being a “casual” worker was introduced and even later – 1916 – that the dominant meaning today – “relaxed or informal” – finally arrived on the scene.

A: Yes, nice segue. So the word “casualty” does come from “casual”. It stems from that same “by accident or chance” meaning – adding the “–ty” on the end just as words like “royalty” or “penalty” had done. Initially “casualty” described the victim of any unfortunate encounter, but by the mid 19th century it also came to mean someone killed or injured in battle.

Q: I often get “casualty” and “causality” mixed up.

A: Funny you should say that, because for a while there during the 1600s, there was also a word “casuality” – which meant “a chance occurrence”. It was, however, a casualty of the ever-evolving English language and became redundant.

Q: At least that’s something that can’t happen to a casual worker…

PrevPreviousCOMP CLOSED: Do YOU deserve to WIN ‘Into the Night’ from Sarah Bailey?
NextTwo 2019 Australian Book Review competitions are now open!Next