Q&A: “Finding a needle in a haystack”? 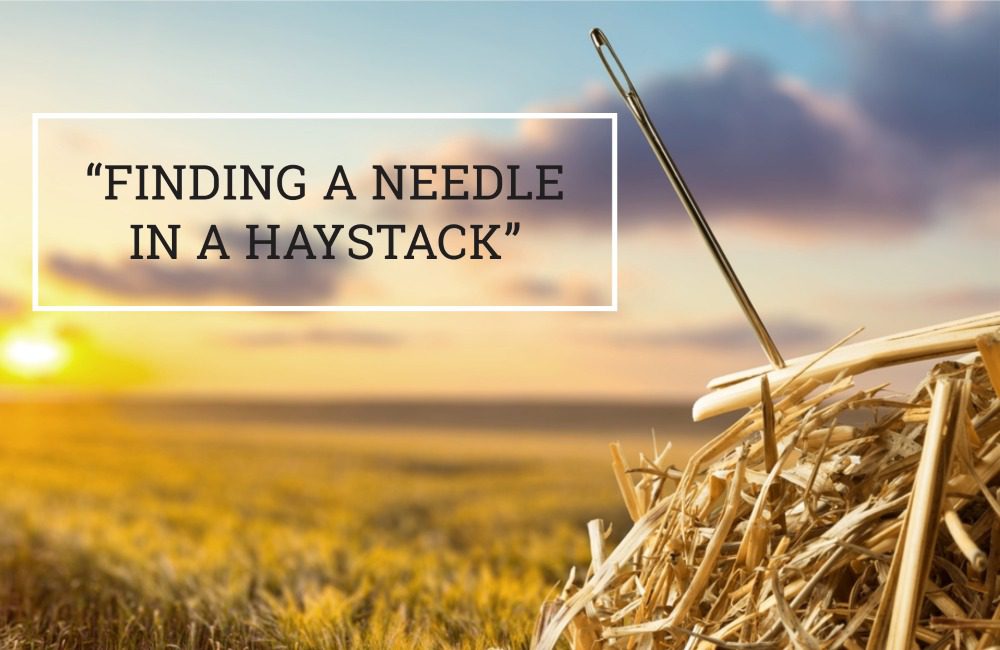 Each week here at the Australian Writers’ Centre, we dissect and discuss, contort and retort, ask and gasp at the English language and all its rules, regulations and ridiculousness. It’s a celebration of language, masquerading as a passive-aggressive whinge about words and weirdness. This week, we have hay fever…

Q: Hi AWC, can you believe we’re at the end of another year?

A: The calendar doesn’t lie.

Q: Finding good things to say about 2020 is like trying to find a needle in a haystack.

A: Or a vaccine-filled syringe.

Q: Nice. Actually, where did that come from?

A: What, this syringe? We thought you brought it with you.

Q: No, not that. The phrase “needle in a haystack”.

A: Oh. Would you like us to hold a straw poll to find out?

Q: Haha, very funny. Actually, why are they even called “straw polls”?

A: Apparently it’s from holding up a stick of straw to test which way the wind is blowing. The wind in this case, being the wind of public opinion. They date back to the 1800s, but the name “straw poll” wasn’t seen widely until 1932.

Q: Ah okay. So, back to our needle and haystack…

A: Well, the meaning is clear – a simile that likens something as being very difficult or time consuming, much like the task of searching for a needle in a haystack.

A: The word “needle” had been around in sewing terms since the late 1300s, and Sir (later Saint) Thomas More was the first to throw it in something resembling a haystack. In his case, the year was 1532 and it was a meadow instead.

Q: What was his version?

A: It referred to the literary works of St. Austin and stated that, “to seek out one line in all his books would be to go looking for a needle in a meadow.”

Q: When did the hay come along?

A: Yes, well, in that book, he describes searching for a needle in a “bottle of hay” – another term at the time for a bundle of hay.

Q: But why a needle at all? You’d think there would be harder things to find than a shiny needle?

A: Especially if you were making hay while the sun shines, right?

A: Well, while some needles were indeed made of metal, they were also made from wood or bone – which you can imagine would be significantly harder to find in a pile of hay.

Q: Fair enough. So when did that “making hay while sun shines” idiom originate?

A: This one is all about making the most of favourable conditions and it appeared in 1546 – not long after Sir Thomas More played hide ‘n’ seek in his meadow. People were rather obsessed with hay during the 1500s.

Q: You might say they had “hay fever”! Haha.

A: We’d prefer to keep this professional, but we are flattered.

Q: No! I mean, when did THAT saying turn up?

A: Oh! Well, that’s quite late – not becoming popular until the 1940s, perhaps due to its use in a 1941 book and subsequent film, This Above All by Eric Knight.

Q: Do you have time for one more?

Q: Where does “haywire” come from?

A: Well, the basic term is as it sounds – a soft wire used for bundling up hay – and that term arrived in the late 1800s. However, in the early 1900s, its lack of strength saw it become a term for how poorly something was held together – similar to how we might also use “duct tape and chicken wire” these days.

Q: Hey, that’s how I wrap all my Christmas presents!

A: Okay, well anyway, haywire’s springy and uncontrollable properties led to the term “to go haywire” in 1915. Things that go awry continue to use “haywire” more than a century later.

Q: Well thank you once again for providing all the answers. It’s time for me to hit the hay.

A: Actually, “hit the hay” was first recorded by American sportsmen in the early 1900s. In the 1940s it was joined by “hit the sack” (probably filled with hay), and curiously that was the time that to “roll in the hay” and “get in the sack” took on a similar “bedding” meaning.

Q: And on that note, to all a good night!