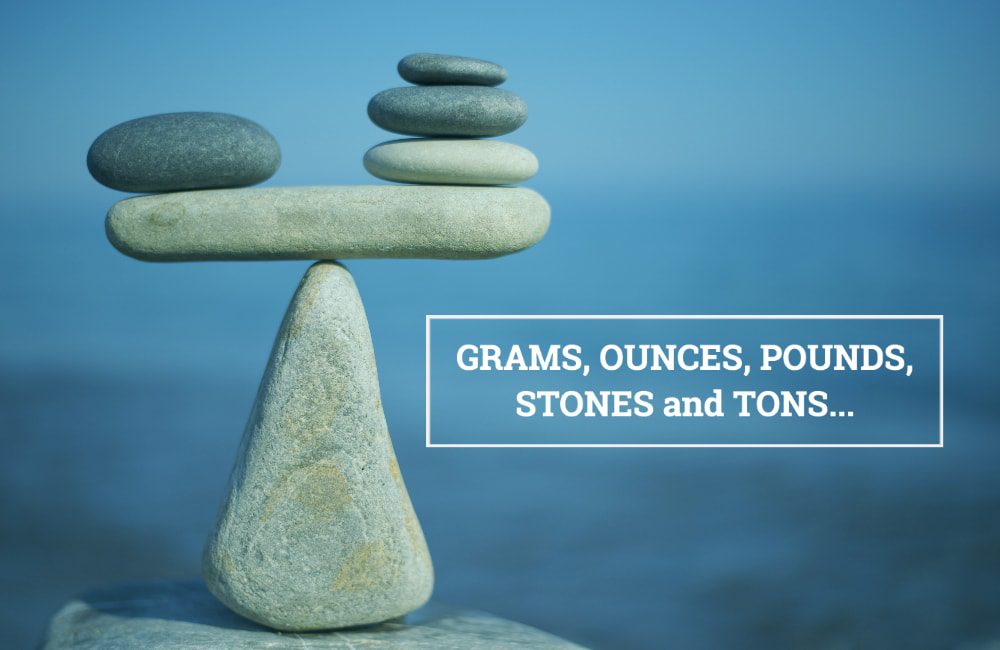 Each week here at the Australian Writers’ Centre, we dissect and discuss, contort and retort, ask and gasp at the English language and all its rules, regulations and ridiculousness. It’s a celebration of language, masquerading as a passive-aggressive whinge about words and weirdness. This week, weight for it…

Q: What? No, I mean I want to talk about the different words we use to measure weight!

A: Ahhh, got it. You’ll have to excuse the “mass” confusion there.

Q: Right, so where should we start?

A: Well, let’s get the most logical one out of the way first.

A: That’s right. All its order and clear rules have no place in a discussion about the English language.

A: The French were the first to adopt the decimal-based metric system in the 1790s. “Decimal” came from the Latin “dec” meaning tens or tenths. December had been the tenth month in the old Roman calendar and other words like “decade”, “decathlon” and even “decimate” come from this.

Q: Wait. “Decimate”? But doesn’t that mean to destroy?

A: Yes, and its origins were through rounding up everyone and putting to death “every tenth man”.

Q: Wow, okay. But back to the metric system?

A: Ah yes. So the French kicked it off, with the name relating to the Greek word “metron” meaning measure. This whole “factors of 10” system was designed to be simple to understand and measure a range of things, including weight. For this, everything revolved around the “gram”.

Q: Hashtag “I know right?” Everything seems to be done “for the gram” these days – I can’t remember the last time I ate a meal while it was still hot. And if I have to lug one more brightly coloured raincoat up to a mountain peak…

A: Um, no, we’re not talking about Instagram. We mean the unit “gram” – or “gramme” in French – debuting with the metric system in 1797. The word came from Greek and Latin “gramma”, meaning “small weight”. Words like milligram and kilogram were also created for the system.

Q: And it’s a great system. So why do babies keep ruining things?

A: That last one was a big baby. But yes, you’re right – with things like height (“I’m five foot seven”) or birthweights, we do slip into the Imperial units – it’s basically the Pepsi to metric’s Coca Cola.

Q: Things are bubbling to the surface now! So where do we start?

A: We actually start back with the French again – but this time in the late 13th century, with the invention of the “Avoirdupois system”.

Q: So what did this “Foie Gras Au Revoir” system do?

A: It’s “avoirdupois” – meaning “goods of weight” and it came to the rescue for England in the early 1300s as a standard way to measure the amount of wool they were exporting to Europe.

Q: A dyed-in-the wool system so they wouldn’t get fleeced on trade, huh?

Q: No feeling sheepish or pulling the wool over their eyes!

Q: An essential tool for baaaartering with other countries…

Q: Okay fine. Tell me about this clever-clogs system then.

A: Clever-clogs system? No, that was the Dutch. This is about wool.

Q: I’ll do the jokes thanks.

A: Right, well, one measurement unique to Britain is the “stone”. You might hear someone talk about “weighing 9 stone” for example. It turns out that a “stone” was one of THREE main pillars of this original imperial system.

Q: So how much IS a “stone” in this “Blanche Dubois” system?

A: It’s Avoirdupois. And a “stone” today is equivalent to 6.35kg. But back in 1300s England, it was literally the fluctuating weight of a “big rock”, so could be anything between about 2kg and 14kg, depending on where you were and what you wanted to weigh.

Q: What a stupid system. Did they have rocks in their heads?

A: The real question is HOW MANY rocks did they have in their heads? Thanks to a messy mix of mismatched measuring systems, there was chaos before the arrival of “Avoirdupois” – which helped… um… set things in stone.

Q: Nice. And kudos on the alliteration too.

Q: So how did they decide what “one stone” was?

A: You’ll love this. The King had his best marksmen throw rocks at a tree. One of them killed two birds with one stone, so that was chosen to represent “one stone” – and it’s where the saying comes from!

A: In actual fact, it was decided that “14 pounds” would equal one “stone”. And one sack of wool would equate to 26 stone.

Q: Whoa, let’s back things up a bit. What can you tell me about pounds?

A: They got their name from the Latin “libra pondo” unit of measurement and in Britain they would also go on to be a unit of currency – one pound being equivalent to “a pound of silver”. With weight, a pound was defined as “16 ounces” and its units were “lb” in a nod to the “libra” weighing scales. Even the enduring £ money symbol is a fancy “L” for libra!

Q: Okay great, but this is like a Russian doll situation. Now we need to know about “ounces” please!

A: Right. “Ounces” got their name from Old French “unce” – which translates as being “one-twelfth” of a pound. (The word “inch” also comes from “unce” – with 12 inches in a foot.)

Q: Wait. Didn’t you just say that there were 16 ounces in a pound?

A: Yes, but initially there were 12. The Avoirdupois system decided that having 16 ounces to a pound would be better for trading because you could divide things up easier in even numbers.

Q: Okay, so we have ounces, pounds and stone. Were there any other measurements in this family?

A: Yeah, that’s America’s fault. Beginning as a British colony, they were happy to  adopt the Imperial system (except for “stone”). Britain went on to lock in their British Imperial System in 1824 exactly we’ve just described above, but by then the USA were in love with simplifying things like spelling and units. They decided to trim the edges and a “ton” instead became a nice round 2000 pounds – about 907kg. That’s known today as a “short ton”.

Q: There’s a ton of information right there.

Q: So what about the spelling “tonne” I sometimes see?

A: Believe it or not, that’s actually something different again – denoting a “metric ton” – i.e., exactly 1000kg. It was adapted by the metric-loving French in 1877, hence the spelling of “tonne”.

A: Most likely. Britain has been converting since 1965, but clearly has some hard habits to break. As for America, their Congress actually voted to adopt it in 1866, but it never happened. That said, the US Army switched to the metric system in the 1950s and US Government agencies in the 1990s. But still not US classrooms or supermarket shelves.

Q: What a weighty topic this has been!

A: You’re right, and we’ve really only weighed in on one area in small detail.

Q: I promise to pick something “lighter” next week!