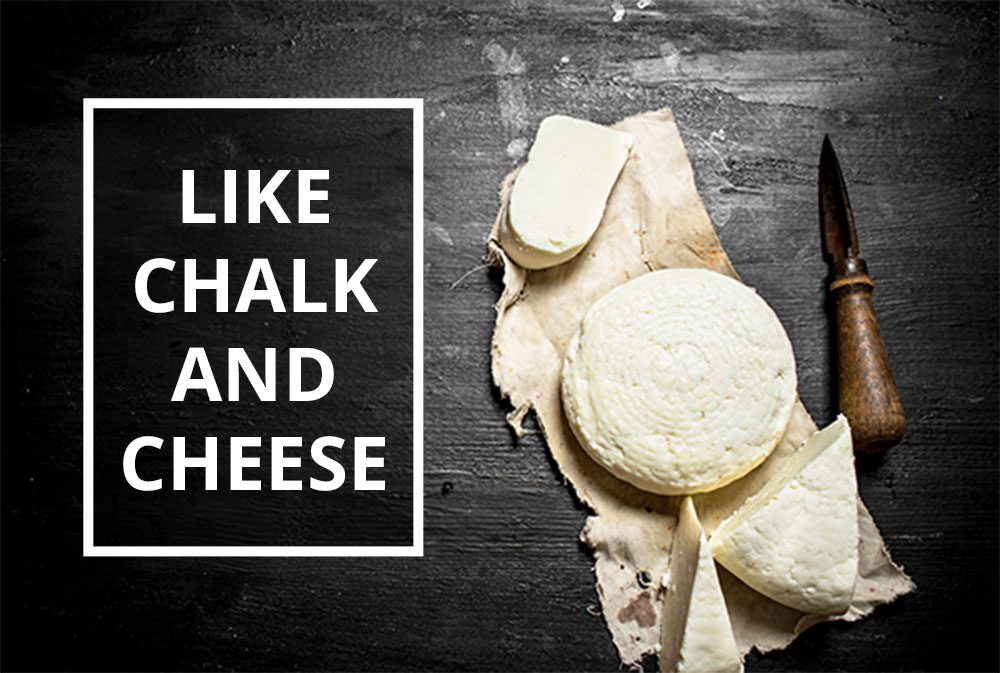 Each week here at the Australian Writers’ Centre, we dissect and discuss, contort and retort, ask and gasp at the English language and all its rules, regulations and ridiculousness. It’s a celebration of language, masquerading as a passive-aggressive whinge about words and weirdness. This week we are adding cheese to our avo on toast!

Q: Hi AWC, I was cleaning out the request cupboard and saw that Kayleigh has asked us about the origin of the phrase, “like chalk and cheese”…

A: We have a request cupboard?

Q: Yes, it’s next to the fire hose cupboard.

A: Oh, is that the one we can’t put anything in front of?

A: Right. Okay, well it sounds like those two cupboards are like chalk and cheese – as in they’re so very different from each other.

A: And fun fact – this phrase means NOTHING to Americans. It’s for British Commonwealth ears only.

Q: Wow, okay – but where did it come from? And WHY chalk and cheese? Why didn’t we end up with “like whiteboard markers and avocado”?

Q: Only if the avo is on toast.

A: Good point. Okay, so in answer to “why chalk and cheese?”, we can easily sum that up with “because English”…

A: It’s a handy card to have. The actual interesting part is that while we have plenty of sayings that talk about how similar things are – e.g. “birds of a feather”, “peas in a pod”, “Happy as Larry” and so on, this one is pointing out the differences.

Q: But some of those crumbly dry cheeses actually do look a bit chalk-like.

A: Well, that may be so, but in general, the original meaning was about differences – akin to saying something is like “apples and oranges” or like “night and day”.

Q: My uncle Jarrod actually owned an orchard and used to pick the fruit after dark for exactly that reason.

A: That makes absolutely no sense.

Q: True, but Uncle Jarrod and logic were like chalk and cheese.

Q: So how old is this phrase?

Q: Gosh, that is accurate. Was it a Thursday?

A: Maybe. You see, it was an old proverbial phrase that first appeared in a 33,000-line poem called Confessio Amantis by John Gower.

Q: Ouch, 33,000 lines? Wouldn’t have wanted to be in the audience at that open-mic poetry night…

Q: So did it mean the same thing back then?

A: Well, initially the phrase was subtly different to today – implying that two things were “superficially alike” but totally different in their qualities.

Q: Oh, so more like “apples and oranges”– if you squint from 100 metres away.

A: Yes perhaps. But over time, it became more like “night and day” to be what Macquarie Dictionary now defines as “complete opposites”. The expression itself took hold properly during the 1500s – and we’ve chalked it up ever since.

A: Besides the fact that they did bear some passing likeness, you need to remember that this was poetry, so the simple repetition of “ch” sounds with short single-syllable words was probably enough.

Q: So are you telling me that the reason “chalk” and “cheese” were chosen was because they WERE NOT “like chalk and cheese”??

A: Ummm, where did that English card go…