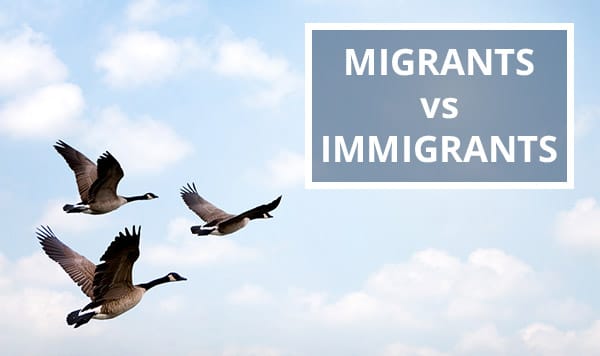 Each week here at the Australian Writers’ Centre, we dissect and discuss, contort and retort, ask and gasp at the English language and all its rules, regulations and ridiculousness. It’s a celebration of language, masquerading as a passive-aggressive whinge about words and weirdness. This week we're discussing migrate, immigrate and emigrate…

Q: Hi AWC, what do we call people who move to Australia from another country?

Q: What I was going to say is whether we call them “migrants” or “immigrants”?

A: Ah okay, good question. It’s probably worth looking at the whole process, if you have time.

Q: I have six minutes.

A: Right then. Well, there are three things that happen in the process. To emigrate is the act of leaving country A. To migrate is to move from A to B and then to immigrate is to arrive into country B.

A: So depending on the point of view of your sentence, you’ll be choosing accordingly. Think of “emigrate” as the same as “go” and immigrate as “come” and then migrate is simply “move”.

A: Sure. “People living in a war-torn country may wish to emigrate.” Or “My cousin wishes to immigrate to Australia.” It’s a fine line, but note the point of view of the first is from the exiting country, while the second example is about the arrival country.

A: Yep, that’s it. Really, it’s just a matter of perspective and prepositions – the same person going FROM someplace is an emigrant, whereas going TO someplace makes them an immigrant.

A: No, animals only migrate – e.g. migratory geese in winter, whales to breeding areas etc. Curiously, the word “migrant” was used for animals long before it came to describe humans. However, no animals emigrate or immigrate – that’s purely political and to do with countries and borders.

Q: So in answer to my original question, an arrival into Australia is an “immigrant”?

A: Yes that’s right. Technically however, all emigrants and immigrants are also “migrants” – as it simply describes someone on the move. But in the context of arriving into Australia, given the choice of just those two words, yes, “immigrant” is correct.

Q: Given the choice?

A: Well, yes. You’d hope that someone arriving here to settle permanently wouldn’t be labelled “immigrant”, but rather “Australian”… Perhaps a different conversation for a different day.

A:. Latin takes credit for this whole family of words. Migrate was originally “migrare” and you simply had the “e-” prefix meaning “out of” and “im-” meaning “into”. These words and their variations have been kicking about in English since the 17th and 18th centuries.

Q: So basically, since there were countries to actually move between…

Q: Time’s up. I think I’d like to migrate away from this topic now.

Dean Koorey manages a team of 26 letters at Australian Writers' Centre, both upper and lowercase, plus some punctuation marks. He can leap cryptic crosswords in a single bound and has never met a pun he didn't like.
PrevPreviousQ&A: Sell like hotcakes, sell your soul, sell yourself short
NextAWC EXCLUSIVE: Interview with ‘Anonymous’Next