Q&A: Suffice to say or suffice it to say? 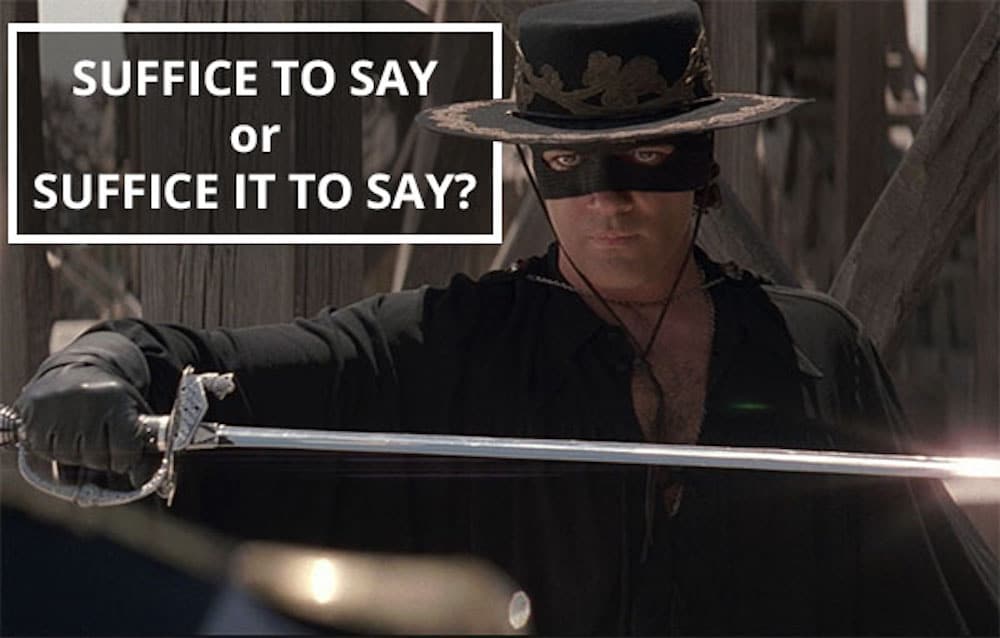 Each week here at the Australian Writers’ Centre, we dissect and discuss, contort and retort, ask and gasp at the English language and all its rules, regulations and ridiculousness. It’s a celebration of language, masquerading as a passive-aggressive whinge about words and weirdness. Suffice to say, we have questions…

Q: Hi AWC, I need you to clear something up for me.

A: We keep telling you, you’ll need to get a prescription.

Q: I’d like to know about the phrase “suffice to say”. Or is it “sufficed to say” or even “suffice it to say”? Or something else entirely? A vague response to this will simply not suffice.

A: Fine, we get it. You can stop saying “suffice” now.

Q: I assume the word is related to “sufficient”?

A: You assume correctly. According to the folks at the Online Etymology Dictionary, the verb “suffice” hails from the Old French “sofire” – and Latin “sufficere” before that. It arrived in English in the late 1300s, meaning “to be sufficient or satisfy” – same as today.

Q: I feel like every time we chat, almost every word came from Latin.

A: Yes, many did start there. You might say that English speakers are Latin lovers.

Q: Like Antonio Banderas in the 1998 film The Mask of Zorro?

A: Very specific, but um sure.

Q: I used to love swishing the letter N just like Zorro did.

A: Wait, don’t you mean the letter Z?

Q: Ohhhh, that makes MUCH more sense. I must have been lying on my side when I watched it.

A: Shall we continue?

A: So, the phrase you’re confused about first appeared in usage in the 1690s – originally as “it suffices to say” but then later as the subjunctive version, “suffice it to say”. Macquarie Dictionary defines it as “let it be enough to say”.

A: The phrase looks odd today because most subjunctive forms – where you invert the subject and the verb – have died out. They typically only remain in expressions like this. “Far be it for me to say” is another, as is “come what may” and “the powers that be”.

A: Yes, that’s another one!

A: Well you’re not alone. Which is why many started using “suffice to say” instead.

Q: Wait, so “suffice to say” is also correct?

A: Yes. As the language moved on and subjunctives became rarer, many dropped the “it”. However, it’s worth noting that America still heavily favours “suffice it to say” and even Britain prefers it. Australia is curiously one of the places where “suffice to say” is more popular – with Macquarie Dictionary listing the phrase as “suffice (it) to say”.

Q: Oh, that’s interesting. And “sufficed to say” or “suffices to say”?

A: You shouldn’t use those at all – just plain wrong.

A: You are fine to use “suffice to say” here in Australia. However, for the rest of the planet, you may want to consider using the awkward longer version.

Q: Thanks, this will suffice.