Success: Historical novels The Girl from Munich and Suitcase of Dreams have sold more than 100,000 copies! Tania's third novel, Letters From Berlin, was published in 2020, and her latest novel Echoes of War is out now. 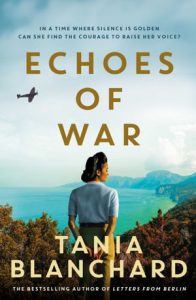 Hitting six figures in book sale numbers seems a million miles from life as a lapsed physiotherapist and stay-at-home mum. But that’s exactly what Tania Blanchard is celebrating after her historical novels The Girl from Munich and Suitcase of Dreams reached 100,000 sales in Australia.

“I feel privileged to have shared my grandmother’s story and I’m thrilled that it has touched so many people,” Tania says. Her novel Letters From Berlin is another extraordinary tale inspired by true events, and her most recent book is Echoes of War, set in Mussolini's Italy.

Tania had enjoyed writing ever since she was a child, but it had become more the product of daydreams in adulthood while working as a physio. She decided to pick it up again when she had her children – writing stories for them at first, before developing one of them into a YA fantasy novel. She worked on it for some time, but as a self-taught writer, she reached a point where she felt she had done all she could on her own.

“I needed to learn more about writing techniques and find the best way that I could improve my writing,” she recalls. And so, with her children all at a school age, it seemed the perfect time to take the plunge. An Australian Writers’ Course in writing for children and young adults seemed ideal.

Tania Blanchard
Graduate of Australian Writers' Centre, author of “The Girl from Munich”

Learning from home and getting valuable feedback 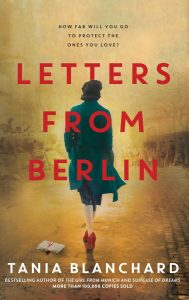 As a mum, getting to evening classes simply wasn’t going to work. The Australian Writers’ Centre’s online courses – complete with online tutor and other classmates – were the perfect way to get the classroom experience that she wanted with the convenience of learning from home.

“I found the audio lectures great. Valerie has a great presentation style that is engaging and easy to listen to. I could listen to them anytime and could go back again and again months after the course to refresh my mind on particular topics and writing techniques.”

Tania also loved the idea of weekly homework as it reinforced what that week’s tutorial had been about and transferred it into real writing and practising new skills. “I found that really useful. I was able to use these new skills and techniques immediately with the book I was writing.”

Another key for her was being able to bounce her story off an audience of peers. “The feedback on each assignment was gold! I think that’s when I learnt where my writing was really at and what I needed to do to improve. It was both encouraging and positive and it always got me thinking about what I needed to do with my story to get it to the next level.

“The courses made the world of difference. I understood so much more about structure, characterisation, dialogue and all the techniques of good writing. I was able to use these new skills to improve my writing and the novel I’d been working on. I was able to move forward in my writing journey and because I had enjoyed the courses so much, I realised how much writing had become part of my life. It was after these courses that I decided I wanted to write as a career.” With that revelation still ringing in her mind, it was clear to Tania that to fulfil her career aspirations, she would need to get her novel published. “Up until this time, becoming published was only a dream. Now it had become more tangible and I was determined to do everything I could to make this a reality for me.”

Tania realised that the YA fantasy she had been working on needed a major overhaul to reach publishing standard. It wasn’t going to be an easy fix, so she decided to put it in a drawer and instead write about something very close to her heart.

“I had grown up listening to my grandmother’s stories about the war years in Germany and after. Her stories had always fascinated me, especially imagining her going through some of these experiences. She died in 2015 and left behind boxes of documents, letters, photos and memorabilia of her life in Germany and here in Australia. Going through her treasures, it felt to me that she wanted her story known. I had always wanted to write about her stories and now I felt it was the right time to do so.”

And so Tania began researching and writing The Girl from Munich  – a far cry from the YA fantasy that had frustrated her so much. She had not only switched to writing historical fiction but also to writing in first person. And the words flowed.

“I shouldn’t have been so surprised at the ease with which I wrote. It flowed so much easier and I found that writing from inside [character] Lotte’s head made sense to me. I had always loved history almost as much as writing and I had known my grandmother very well that I could imagine her as a young woman and so bring Lotte’s character to life.”

Soon, Tania’s manuscript was ready for submission – after many drafts and some wonderful feedback from ‘generous and objective readers’. She had already pitched the idea to publisher Simon & Schuster earlier that year, and now it was the stressful wait to hear their view of her manuscript.

“I was worried they wouldn’t like it and hadn’t worked out what I would do next if they didn’t want it. Another part of me was happy to wait because if they did take on the novel, I knew that my life would change dramatically and the thought of a new career and all that went with it was scary too.”

Tania needn't have worried. Simon & Schuster not only offered her a contract for The Girl from Munich but also its sequel, Suitcase of Dreams. The Girl from Munich was shortlisted for the 2018 ABIA Matt Richell Award for New Writer of the Year, while both books feature on the 2020 Better Reading Top 100 list!

“Although I knew my book had passed the acquisitions meeting, it wasn’t until I received the offer that I felt like I could finally relax and celebrate. The most beautiful part was that my grandmother’s stories were responsible for my first book being published, for beginning my career in writing and for making my dream come true. I’m sure I grinned for days after.” 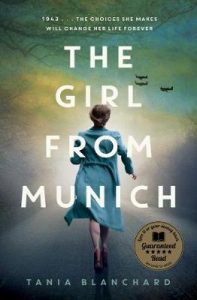 “Writing is now an integral part of my life”

Tania typically writes during school hours and still pinches herself at the surreal turn of events. “I’ve always dreamed of one day becoming published and never imagined it was possible.”

Tania feels grateful for the spark that AWC provided. “I would highly recommend AWC courses to anyone wanting to learn more about writing and to those wanting to take their writing to a professional level.  The courses are not expensive and within reach of most people and the flexible learning with online lessons and forums is a great advantage for many. Take it from me, go and do it, you won’t regret it.”

The online course gave her the convenience to fit writing around her life, but still connected her with other students through the platform. “It was good to have a sense of community with other like-minded people who were doing the same courses and writing felt less like a solitary pursuit,” she says.

“I’m very fortunate that writing is now an integral part of my life.”