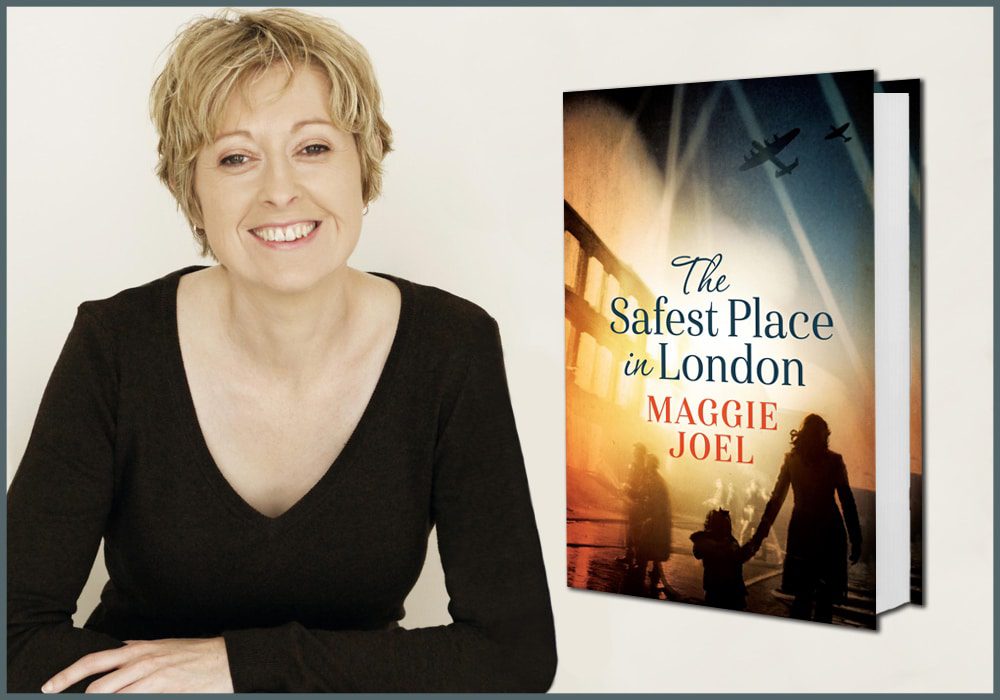 Author Maggie Joel’s latest book is The Safest Place in London – set in a tube station shelter during the wartime winter of 1944. So, we’re here in this bomb shelter talking to Maggie. (Yes, we’re regretting the location already.)

So Maggie, for readers who haven’t acquainted themselves with your new book yet, can you share what it’s about?
“As the Second World-War enters its fifth year and their husbands are serving overseas, two mothers, each with a child under five, have had very different wars. One hails from London’s impoverished East End, the other from a wealthy middle class outer suburb. But they find themselves side by side on the platform of the underground station during a night of bombing in January 1944, a night that will change both their lives forever.”

Actually, our lightbulb has just gone out. One moment. What’s that? Oh, sorry. Okay, sorted. So tell us more about the evolution of the story.
“In the late 1980s I lived for a time in London’s East End and, being new to the area, I began to read a little of the local history. During the worst days of the Blitz, Londoners routinely sheltered in the underground stations to escape the bombing – this much I already knew; it forms part of the ‘Blitz Spirit' that as a child in 1970s and 1980s Britain I grew up with. What I did not know was that on 3 March 1943 as the air-raid siren went off and thousands of people rushed to the safety of Bethnal Green underground station, a woman at the bottom of the steps slipped. The resulting crush left hundreds dead, many of them children. Reading about this tragedy more than forty years later what struck me was that I had never heard of it before. How could that be, I wondered? What I later discovered was that, at the time, the story was deliberately covered up because the government was so concerned about its effect on morale. And in the intervening years, the incident had been entirely forgotten. It was as though it had been airbrushed out of history.”

That is astounding – and true, we’d never heard of it. So how did that further inform your fictional story?
“I changed jobs and moved away from the area and 25 years passed. I had just completed my third novel when a chance conversation about wartime London with a friend’s elderly mother reminded me of that incident: ‘My mum would never take us kids down the Tube to shelter as it wasn’t considered safe,’ she told me. ‘There were rapes and robberies and assaults and you were better off in your own home or taking your chances in the street with the bombs.’ And all at once the myth of the Blitz Spirit became just that – a myth! But it certainly set me thinking…”

Fascinating stuff. So do you have a typical writing day?
“I write on the weekends as I have a weekday job and don't have the energy or time to write at night. I need solitude and loud music – preferably dance music. I start fairly early and rarely work past five o'clock. I try not to read any new novels whilst I am writing a first draft. Instead, I read non-fiction – usually research for the novel – or something familiar and inspiring: when I wrote the first draft of The Safest Place in London I re-read all of Virginia Woolf's novels, some of them more than once!”

Tell us more about your writing process.
“Because this is my fourth novel, I have some idea now of how I work and what the process will be. I start with a single page of ideas and perhaps an opening sentence. I add characters and tinker away at it for a week or two, teasing the idea around, waiting to see if my imagination is sparked or not. If it is, then I sit down and flesh out the story, getting to a point where I have an idea of what each chapter will include and I invent brief bios for the main characters. Time-lines are really important to me – I always record the exact dates that each event in the story takes place so that I can be sure I know how things progress chronologically and logically. At this point I commence the first draft and of course the notes will be added to as I go and will continue to evolve as the manuscript evolves. I find that generally I stick to the original idea with probably a few additions and diversions along the way.  I tend to do three drafts before my agent sees it then a fourth based on her feedback. Then it goes to the publisher. I never show the manuscript – or indeed rarely discuss it – with anyone else during the writing process.”

Wow, that’s a very itemised process – and clearly one that works for you. So are you working on your next book now?
“I'm taking a break to be honest. I worked almost non-stop on books three and four for two years and I seem to have temporarily run out of steam. And life seems to be getting in the way a bit too. If I had a run of empty weekends I would probably start something but at the moment I'm struggling to get one weekend free. Having said that, I'm on a three-week holiday right now and I'm toying with three possible ideas and have done some cursory research on one of those ideas to see if it has legs. Time will tell…”

It sure will. Now before we exit this shelter, do you have some advice for aspiring writers?
“If you are passionate about writing you don't need advice to get you started, you are already doing it. If you are someone who talks about the book you are going to write but never actually sits down to write it, you are not a writer. Having said that, if you are writing, the best things you can do are find a good writers’ group – with people who do not know you and are as passionate about writing as you, do a lot of writing courses and of course read a lot!”

Great advice. And to learn more about Maggie’s latest book, The Safest Place in London, head to her website or buy yourself a copy.