As a budding writer, Fiona Murphy had a slew of writing ideas, but felt she lacked the confidence and skills to make them come to life. After taking Freelance Writing Stage 1 at the Australian Writers' Centre, something clicked and she started successfully pitching stories.

“I used to get overwhelmed by ideas and not know where to begin,” Fiona says. “By doing the AWC courses, I’ve learned how to break down a project—be that a short story, feature article, personal essay, memoir—into smaller pieces. It doesn't really matter how or even where you start—once you begin, you’ll gain momentum.”

That momentum led to the start of her career as a successful essayist and freelance writer, with articles published in The Guardian, The Saturday Paper and Meanjin, among many others. Fiona is pursuing her freelance writing career alongside her full time work in healthcare, and has also now released her debut memoir The Shape of Sound, published by Text Publishing in March 2021.

“Signing the contract was an out-of-body experience—it was both thrilling and terrifying! It took weeks for it to sink in.”

Gaining the confidence to call herself a writer
Fiona’s road to publication was not a straightforward one. As a deaf child, she struggled to learn how to read.

“I simply did not understand how letters and sounds worked. It took years and extensive tutoring from my parents for me to become literate,” Fiona says. “Despite this rather difficult beginning, I became an avid reader. Books became a safe place; I didn’t have to worry about mishearing dialogue or straining my body to follow conversations.”

Fiona had notebooks full of ideas, particularly after a nine-month overland trip from London to Sydney, but she didn’t quite know how to structure them into stories or articles.

“While I had returned home with a strong writing habit, I didn’t know how to craft my ideas into something robust and readable. At the time I felt that I had failed. I believed that I didn’t have the knack to make it as a writer.”

Fiona enrolled in several AWC courses, as she felt more comfortable with the idea of being a student of writing, rather than calling herself a writer.

“This was when I learned how to read like a writer. I began to notice patterns in how feature articles, novels, book cover blurbs were written,” Fiona says. “I began to understand how to structure stories. I realised that writing was less about luck and more about hard graft.”

After completing Freelance Writing Stage 1, Fiona has now written for many publications, including The Guardian, The Saturday Paper, Kill Your Darlings, ABC, Griffith Review, Meanjin and The Big Issue and she was awarded the Overland Fair Australia Essay Prize in 2019.

“Through the course at the Australian Writers' Centre, I discovered that it's possible to have your work published, not just once, but on an ongoing basis. It’s absolutely changed how I view writing. Before, I thought it was only for certain people with certain educations from specific backgrounds, but it has been incredibly accessible,” Fiona says.

Fiona has also appeared at various writing festivals and now proudly calls herself a Deaf poet and essayist.

“I tend to have three or four freelance projects on the go, ranging from personal essays and feature articles to book reviews and advocacy work,” Fiona says. “The variety of forms and word counts is helpful. I tend to switch from one project to the next. This gives me a sense of productivity. It also safeguards against writer’s block. If I get stuck on one project, switching to another form and focus frees up my brain.” 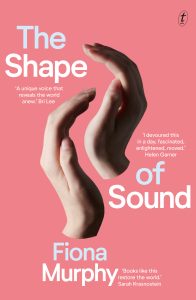 “When I was writing The Shape of Sound, which is a memoir about hearing loss, I didn't think that it would be an idea that would necessarily impact other people who didn't have experience of hearing loss, but I started to use the skills that I learned from the Australian Writers' Centre to find ways to make this topic, that seems so simple and straightforward, to bring it to life,” Fiona says. “I took the book more as kind of all the lessons I learned from freelance writing.”

Following advice from Valerie Khoo and Allison Tait in their popular podcast So you want to be a writer, Fiona started entering her manuscript in competitions. They gave her a focus and, more importantly, a deadline.

“Initially I was afraid of rejection, but I soon got used to the process of drafting and redrafting, submitting work and waiting for a response. The repetition allowed me to become invested in the process rather than the outcome.”

Her hard work paid off when her memoir, The Shape of Sound, was shortlisted for the Richell Prize in 2018 and highly commended in the Wheeler Centre Next Chapter fellowship. Fiona then started to be approached by agents and publishers but she was reluctant to rush into a book deal.

“I was writing about my experiences with deafness. I had kept my hearing loss a secret for almost 25 years. I wanted to make sure that I was comfortable with the content before signing a contract,” Fiona explains. “I was also unsure how to represent Auslan (Australian Sign Language) on the page—given that it is a visual language with a complex spatial grammar, I wanted to be certain that these sections were accurate and respectful. Fortunately, I had mentors, colleagues and friends within the writing community who were able to guide me through this exciting process.”

“I’m so glad that I didn’t rush into a contract. Having spent so much time thinking deeply about the content of my memoir, I felt confident when talking to the publisher, marketing and publicity teams.”

Always open to learning
As a full time healthcare professional, Fiona finds time to write in the ‘cracks of the day’.

“I aim to do 15-20 minutes of writing most days. Just enough to keep the characters alive in my head. Often writing in the notes section of my phone during lunch breaks or while the kettle is boiling,” Fiona says. “At the end of each week I email myself the notes. This way it never feels that I am starting a weekend writing session with a blank page.”

Although she has now established herself as a successful writer and memoirist, Fiona still believes that she has more to learn.

“Regardless of how you feel about your writing—coolly confident or terribly uncertain—it is vital to always be open to learning. I consider writing courses to be a fundamental part of my professional development. Not only am I continually seeking new skills, but I’m making sure that the ones I have acquired remain sharp,” Fiona says. “AWC courses have been invaluable on my path towards publication.”