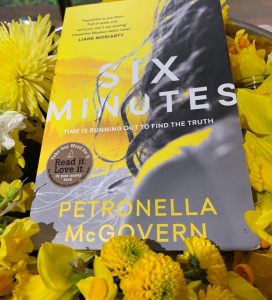 Congratulations to AWC alumna Petronella McGovern who launched her debut novel Six Minutes at Berkelouw Books in Mona Vale in Sydney last week. With over 160 people attending, it was so popular, the event had to relocate across the road to the Memorial Hall.

Launched by bestselling author Liane Moriarty, it was a wonderful event to mark the release of Petronella’s first book. “It was surreal to walk into a bookshop and see Six Minutes on the shelf, with my name on it!” says Petronella. “The day after Six Minutes was released, I went into my local Harry Hartog and introduced myself. They asked if I’d like to sign some books.

“Then I was so excited that this moment had finally come that, when I signed the first book, I spelt my name wrong! Luckily, I could fix it. At that point, I was just laughing at myself.

It’s even more surreal to receive reviews of the book on blogs and in newspapers. It’s so exciting that people are reading my book!”

The launch was also another first for Petronella. “This was my first public speaking event about the book, so it was a bit overwhelming. And I was worried about speaking to such a large crowd but then everyone was so lovely and welcoming that we just had a fantastic night.

“When I thanked Berkelouw for hosting the launch, I said that I’d been to many events at their bookshop listening to other authors, and it was wonderful to finally be the one standing up with the microphone! I met lots of lovely readers and book clubs, and signed lots and lots of books.”

Petronella has completed several courses at the Australian Writers’ Centre including the six-month Write Your Novel program. “I had my writers’ group there, who I’d met through the novel course at AWC. They were all very excited to see Six Minutes in print after all their feedback and encouragement.”

You can read about Petronella’s journey to publication here.

EASTER SALE: Up to 40% off until Easter Monday VIEW COURSES