We're thrilled to share that AWC alumna Petronella McGovern has made the shortlist for the 2020 Ned Kelly Crime Awards for her thrilling debut novel Six Minutes.

It's an incredible achievement as the awards attracted a large number of entries this year. Australian Crime Writers Association chair Robert Goodman said that the quantity and quality of entries demonstrates that Australian crime writing and reading has never been stronger.

“This is not just evident in the number of submissions but the diversity and quality of the entries. Congratulations to all our entry authors.” 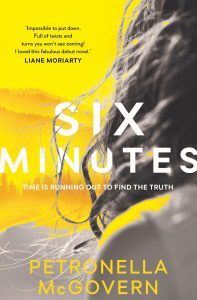 Petronella finished her first draft of Six Minutes while undertaking the Write Your Novel program at the Australian Writers' Centre. Through the course, she gained valuable feedback and made lifelong writing friends.

“We still meet up, support each other and give feedback on our writing. We all write in different styles and in different genres and I think that helps us in critiquing each other. I was so appreciative of their feedback on Six Minutes – in particular, they helped me to sort out some plot issues and make it a better book.”

Two other authors within their group, Margaret Morgan and Frances Chapman, have also been published.

Petronella honed her crime writing skills with the course Anatomy of a Crime: How to Write About Murder, which she found fascinating.

Congratulations, Petronella, on this thrilling achievement!