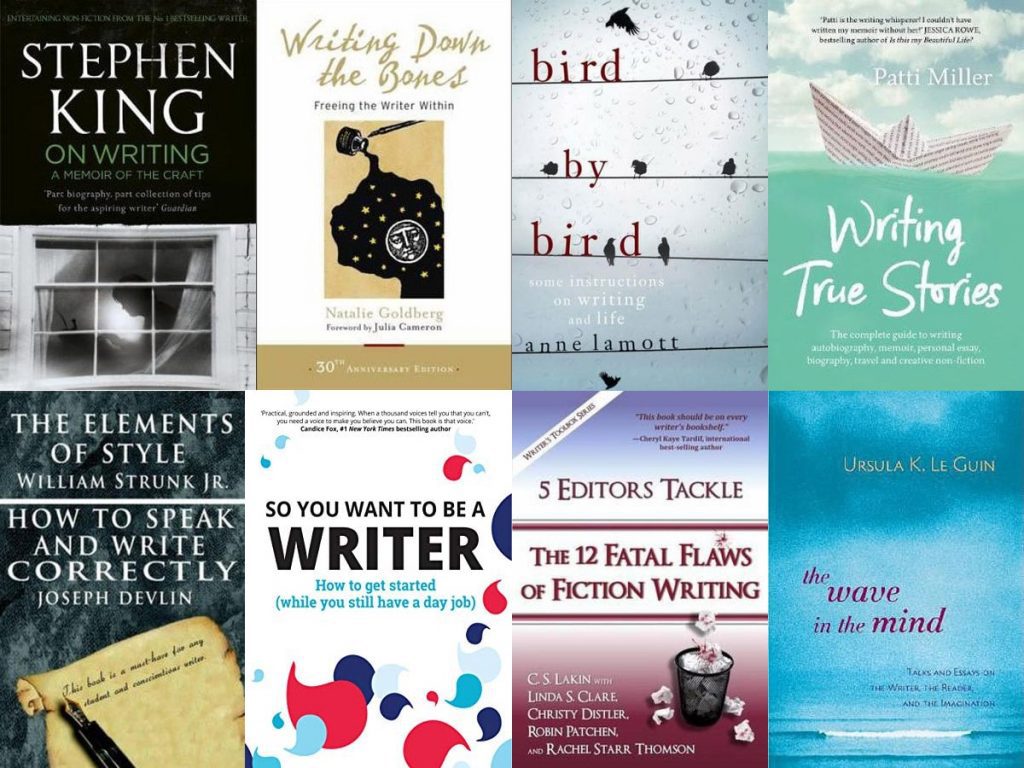 There are loads of books out there about writing and it can be hard to find one that really connects with you. They can offer advice or exercises, rules or suggestions, or just provide inspiration.

Consider this the definitive list of books on writing as 100% endorsed by successful writers.

1. On Writing by Stephen King

Most authors agree on one standout book about writing – and that’s Stephen King’s On Writing. Allison Tait, bestselling author of the children’s fantasy series The Mapmaker Chronicles and The Ateban Cipher says simply that it is “the most accessible book about writing I've ever read”.

In fact, when we asked around to some of our favourite authors, they all said the same thing. “I agree with Allison!” says Pamela Freeman, bestselling author of children’s and adult books. “On Writing is very good.”

“I too would choose On Writing by Stephen King,” says Nicole Hayes, award-winning author of children’s book One True Thing.

Joanna Penn, from website The Creative Penn, agrees. “Insights about writing that will make you feel better about where you are,” she says on her blog. “Even the uber-mega-stars have a difficult time! Includes timeless advice on ‘butt in chair.'”

2. Writing Down the Bones by Natalie Goldberg

The goal of Goldberg’s book is to use “writing as your practice, as a way to help you penetrate your life and make you sane”. She draws on zen meditation and encourages developing a daily writing practice.

Bestselling author Karen Viggers found Goldberg’s book useful as a precursor before writing her first novel. “I did spend six months just loosening up, doing stream of consciousness writing. Using the book Writing Down the Bones by Natalie Goldberg,” she told us. “That was really useful for me.”

Tristan Bancks, a successful author of books for kids and teens, agrees. “I'm a big fan of Natalie Goldberg's Writing Down the Bones, as well,” he says. “I try to meditate whenever I can, which is about getting down into where you are at that moment. Those things help you to be an observer of what's around you.”

3. Bird by Bird by Anne Lamott

Bird by Bird is another book that encourages writers to look at their craft holistically, to try living a creative life, rather than just giving writing tips and advice.

“It’s a beautiful meditation on writing and life and how they feed into one another,” says Angela Slatter, the award-winning author of supernatural crime novels Vigil, Corpselight, and Restoration.

Maria Popova, who runs the popular site Brain Pickings, agrees. It is “a treasure trove of insight both practical and profound, timelessly revisitable and yielding deeper resonance each time,” she says on her blog.

“I couldn't have written my memoir without her!” Jessica says. “She taught me how to stop daydreaming and to get writing.”

Using a combination of advice and exercises, Miller’s book takes writers on a journey and provides much needed support along the way.

“Patti has helped so many students write about their life, and also other people's lives,” says Valerie Khoo, visual artist and Director of the Australian Writers’ Centre. “This book is life-changing for people.”

Magdalena Ball, who runs The Compulsive Reader, agrees. “It’s hard to read this book in a detached way as an ‘armchair writer,’” she says on her website. “Miller has created one of the best resources for would-be non-fiction writers that I’ve yet to find.”

5. The Elements of Style by Strunk and White

This is another popular choice of published authors. First published in 1918 by William Strunk, and updated in 1959 by E. B. White, The Elements of Style is generally considered the definitive guide to grammar and English usage.

“Although ‘old-fashioned’, if you master its content you will have real control over your sentences,” says Pamela Freeman.

DBC Pierre, author of Vernon God Little, also lists it as a must-have for every writer. “The rules of modern writing have been around for a century, and this tiny volume is where they spent all that time,” he says. “It still smells of chalk and tweed, and still inspires us to do things properly, if only via a sense that we might be shouted at if we don’t.”

6. So You Want to be a Writer by Allison Tait & Valerie Khoo

The two hosts of the popular podcast So You Want to be a Writer have taken five years of advice and interviews with more than 120 authors and condensed it into this book.

“So many pro tips in here from working writers,” says Tristan Bancks. “This is like Tim Ferriss’s Tools of Titans but exclusively for writers. I loved it.”

The book covers practicalities that are often overlooked in other books, like productivity tips, networking and how to find other writers to connect and share with.

“Practical, grounded and inspiring,” says Candice Fox, a bestselling crime fiction author. “When a thousand voices tell you that you can't, you need a voice to make you believe you can. This book is that voice.”

Pamela Hart, award-winning historical fiction author says: “Perfect for the person who wants to write but doesn’t have the confidence or the know-how to start.”

If woo woo isn’t for you, then Cathie Tasker, who has edited and commissioned nearly 800 books, recommends this practical volume.

“Avoid these traps and lift your writing to the next level. Easy!” she says.

The book originally started as a series of blog posts written by five editors. “What writers need are not more books and instructors telling them what to do and how to do it. They need examples,” says one of the authors, C S Lakin. “And not just examples of great fiction writing. They need examples of weak, flawed writing too.”

8. The Wave in the Mind by Ursula K. Le Guin

There’s no doubting that Ursula K. Le Guin was one of the most important literary voices of the past 50 years. In this collection of essays she explores her usual dazzling array of topics, covering everything from 19th century literature to beauty and fashion.

But these are not your usual stuffy essays, not with Le Guin. “People who deny the existence of dragons are often eaten by dragons. From within,” she says. She also has strong opinions on Ernest Hemingway and semi-colons, justice, and imagination, as well as writing and creativity.

“It’s an amusing and clever take on the craft of writing,” says Angela Slatter.

Nat Newman is a freelance writer.